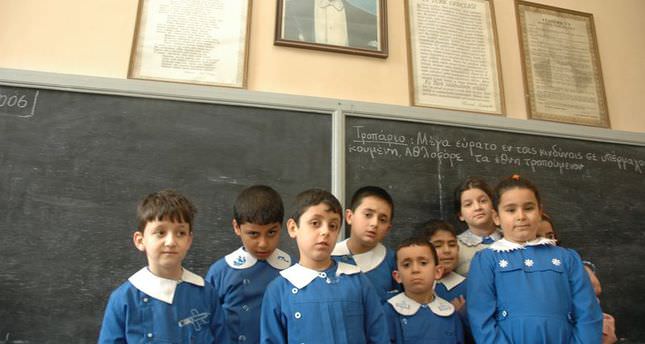 by Daily Sabah Jun 17, 2014 12:00 am
Turkey's Greek community, will have a second school in Gökçeada, a Turkish island in the Aegean Sea, decades after schools on the island were closed due to a diminishing number of Greek-Turkish citizens ejected from the country by state policies. The school is scheduled to open in September when the first semester of the academic year started.

Located near the province of Çanakkale, Gökçeada is Turkey's largest island. Once primarily inhabited by Greeks, the island now hosts a mixed population of Turkish and Greek-Turkish citizens with Turkish people dominating the population.

The first school exclusively catering to Greek citizens of the island was a primary school opened last year, five decades after the Greek schools were closed on the island in the absence of students as a result of discriminatory policies targeting the minority. Encouraged by the Turkish government's reform efforts to restore the rights of minorities, the country's Greek citizens, commonly known as "Rum," seek to return to the days they led a quiet existence alongside Turkish people, enjoying the same rights as them. Through opening schools, the Greek community in Turkey also hopes to attract the Greek diaspora abroad back home where they could raise their children without a state policy hostile to minorities.

The second school, which was used as a primary school up until the 1960s, is located in Gökçeada's Tepeköy, or Agridia in Greek. Representatives of Turkish Greek foundations signed a protocol with the local governorate in Gökçeada for the handover of the building. It was originally built as a Greek school decades ago but was closed down in 1964 as Greek residents of the island gradually emigrated due to discriminatory policies by the state of Turkey, such as the massive settlement of Turkish people from the mainland and the appropriation of buildings and lands.

The new school will serve as a middle school and high school for children of Greek families. However, attendance numbers are not expected to be high since the population of Greeks dropped to hundreds from thousands over the past decades. The primary school opened last year had four students only. Still, the community hopes that the school will draw families migrated from the island back.

Turkish media reported four families currently living in Greece already returned to the island and considers enrolling their children in the school.