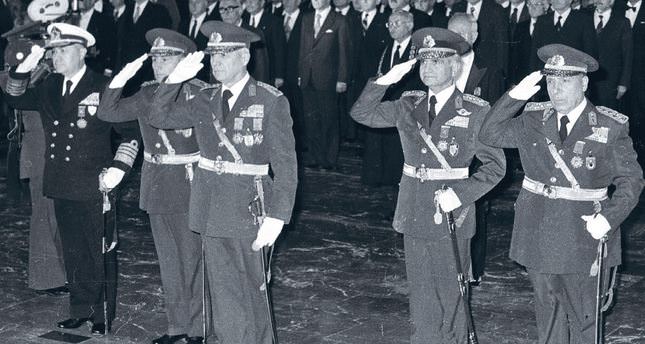 General Kenan Evren, who led the 1980 military coup and Tahsin Şahinkaya, his air force commander, were given life sentences for their role in the coup by a Turkish court yesterday. The verdict is the first of its kind for people involved in a coup in Turkey

A court in Ankara handed down life sentences to Kenan Evren, the Turkish chief of general staff who spearheaded the military coup in 1980 and served as president until 1989, and then Air Force Commander Tahsin Sahinkaya, in yesterday's hearing on the coup.

The prosecutor in the lawsuit was asking for aggravated life sentences for both defendants, the lone surviving members of the coup regime, but the court lessened it to life sentences due to the good behavior of the defendants throughout the trial.

They were facing charges for crimes against the state, namely forcing the dissolution of Parliament and removing democratic order, punishable with aggravated life sentence under Turkish law. Death sentences for such crimes were abolished in 2002. Evren, 96 and Sahinkaya, 89, attended the hearing at the 10th High Criminal Court in the capital Ankara via video.

Both former generals are under treatment at military hospitals in Ankara and Istanbul for a list of illnesses due to their old age. The judge asked for their final statements before announcing the verdict but both Evren and Şahinkaya did not declare anything. The court found both defendants guilty for the coup on Sept. 12, 1980 and for their memorandum to the government on Dec. 26, 1979, which implied they would launch the military coup.
The court also ordered dishonorable discharges for both retired generals to be recorded.

Families of people who were imprisoned, tortured and "disappeared" during the coup for their political views were also present at the courtroom, carrying photos of their relatives.

The trial started in April 2012, and its last hearing was held in May. The case was transferred to the Ankara court, as the country recently abolished the special mandate courts handling coup cases and terror-related crimes.

Army chief Evren, who came to power during the coup after years of turmoil between political factions, and Şahinkaya, a senior leader of the coup regime, are the sole defendants of the trial.

According to the indictment prepared by the prosecutor Erdinç Hakan Özdabakoğlu, the coup regime systematically tortured and mistreated political prisoners. The prosecutor pointed to "a deep state" within the state apparatus which led to the coup by inciting turmoil in the country and preventing law enforcement from curbing the violence perpetrated by (right-wing and left-wing) factions. He said the defendants had planned the coup about one year prior to committing it. Describing the coup plot, the prosecutor said in the indictment: "The idea of a coup was conceived in July 1979 among high-ranking officers of the army.

Kenan Evren held talks with other commanders and asked his deputy Gen. Haydar Saltık to form a secret group (to conduct the coup)." The indictment said that Evren sent a memorandum to the prime minister and reminded him of the army's authority to execute an Internal Service Act article in the constitution, an act which was used as a pretext for the military coup. The ambiguous article states that the Armed Forces' duty is to protect and safeguard Turkey. Evren's letter was "a threat to democracy" according to the indictment.

The indictment also details the plan for the coup. "The plan was to topple the government through a confidence vote so that a military coup would be welcomed in an environment of uncertainty dominated by anarchy and economic problems. But Necmettin Erbakan, leader of the opposition National Salvation Party (MSP) supported the government during the confidence vote in an unprecedented move, and government's survival to the vote delayed the coup," the indictment stated.

Following the coup, all political parties were banned in Turkey and their leaders were imprisoned. Media outlets publishing reports against the coup were shut down. The coup regime dismissed 30,000 civil servants and banned 300,000 people from traveling abroad, according to the indictment. "For instance, (folk music singer) Ruhi Su was not issued a passport, despite his request, for treatment abroad for cancer and this led to his death," the indictment reads. The prosecutor also noted 14,000 people who fled Turkey after the coup were branded traitors and their Turkish citizenship was annulled. Fifty people were executed after the coup, mostly for politically-motivated charges, including a 16-year old boy.

The indictment said political activists, both from left-wing and right-wing movements were subject to torture in detention particularly in Diyarbakır prison in southeastern Turkey and Mamak prison in the capital Ankara, two notorious sites which were known for torturing political prisoners. The indictment claims 191 people died in detention from 1980 to 1983.

Prior to the coup, Turkey was gripped with political instability, an economy in dire straits and increasing violence between left-wing and right-wing groups. Despite declaring martial law several times, the government failed to curb the nationwide violence that took the lives of over 3,700 people from 1979 to the date of the coup according to unconfirmed statistics. Murder of political activists, people simply regarded as leftwing or right-wing, were a daily occurrence. Although the coup ended bloodshed, it dealt a serious blow to the fledgling state of democracy in the country that suffered setbacks since the first coup in 1960 changing the country's political landscape. The coup was long criticized for its brutal handling of political prisoners.

In an interview in 2009, Kenan Evren defended the coup and claimed the public supported them. He said he would kill himself if convicted in the coup case. "Remember what happened before September 12. The parliament could not even elect a president. Every day, scores of people were being killed. What would we have done? We couldn't simply watch it," he said in the interview.

Both defendants will appeal the verdict and may be awarded a pardon. Under a law enacted in 1991, Evren and Şahinkaya may be released after serving eight years in prison as the law stipulates that convicts in cases committed by 1991 and sentenced to life would be released without consideration due to good behavior or other factors after eight years. They may also be granted a presidential pardon as presidents tend to
grant pardons to ailing, elderly convicts.
RELATED TOPICS