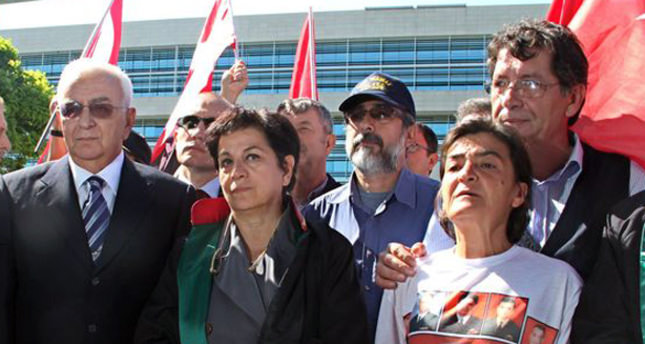 by Daily Sabah Jun 19, 2014 12:00 am
Lawyers for 22 defendants in the Sledgehammer military coup plot trial appealed to the court for their release after Constitutional Court ruled on Wednesday that their rights were violated.

The Constitutional Court unanimously ruled that there were reasons to doubt the evidence and testimonies of witnesses used in the trial where 230 defendants were convicted in September 2012 on charges of plotting a military coup. The court said the ruling was based on the breach of the defendants' rights concerning "digital data" collection and wiretapping against them. It also cited that former Chief of General Staff Hilmi Özkök and former Land Force commander Aytaç Yalman were not summoned to the court as witnesses despite requests by the defense.

The ruling paves the way for a retrial of the defendants who were sentenced to prison terms ranging from six years to 20 years for plotting to topple the Turkish government as part of the "Balyoz" (Sledgehammer) coup plan.

Two lawyers representing 22 defendants presented their plea to an Istanbul court yesterday, demanding their clients' conviction should be terminated and a retrial.

Sledgehammer is an alleged military coup plan by a junta in the Turkish Armed Forces which reportedly dates back to 2003, a year after the ruling Justice and Development Party (AK Party) came to power.

According to the alleged plan, the military was to systematically foment chaos in society through chilling acts of violence including bombing of mosques in Istanbul and downing of a Turkish war plane over the Aegean Sea.

Defendants had been claiming that Balyoz was a theoretical exercise prepared by the army in 2003 and should not be seen a coup plan. Their lawyers have also claimed the evidence such as a hard drive allegedly including documents related to the coup plot were tampered with. A report by Scientific and Technological Research Council of Turkey (TÜBİTAK), top state authority, files were loaded to the hard drive with evidence after the arrest of defendants.

Speaking yesterday about the Constitutional Court's ruling, Prime Minister Recep Tayyip Erdoğan said he hoped that "justice will be served."

Suspects include top generals and lower-rank military officers. Among those imprisoned in the case is Engin Alan, a retired general who was elected MP from Nationalist Movement Party (MHP) while he was in prison.
Apart from Sledgehammer case, the Constitutional Court also ruled rights of Hanefi Avcı, a former police chief, were also violated. Avcı was sentenced to fifteen years in prison in 2010 on charges of terrorism after a court accused him of aiding a terrorist organization.