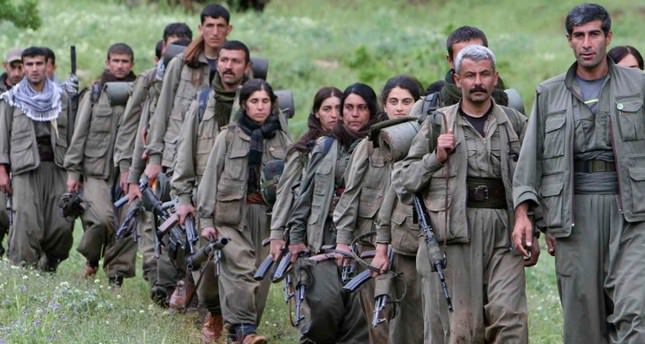 by Daily Sabah Jun 20, 2014 12:00 am
After weeks-long protests in Diyarbakır, mothers, whose children were kidnapped by PKK terrorists, succeed in pressuring the group to announce that it will release all children below the age of 16, and allow parents to meet with children between the ages of 16 and 18

The terrorist organization PKK announced it will send its under-16 recruits back home, according to reports in Turkish media outlets.
The PKK has not yet confirmed the report.

However, if true, ending child recruitment practice would mean a victory for the Kurdish mothers who staged a sit-in protest over the last month, demanding the return of their children who were persuaded to join the PKK. Officials from Geneva Call, an international nongovernmental organization which signed a deed of commitment with the PKK in October 2013 to protect children from armed conflict, met PKK officials Bahoz Erdal and Delal Amed in Qandil, a mountain town in Northern Iraq where the terrorist organization is based. Erdal and Amed told them any recruits below the age of 16 will be sent back home "if detected" in the ranks of the organization and those between the ages of 16 and 18 will be allowed to meet with their families. The meeting reportedly took place earlier this month. PKK officials told the delegation from Geneva Call they were committed to their deed and were conducting a census to determine the age of their members.

Murat Karayılan, acting leader of the the PKK, told media outlets close to the organization that they were not admitting people below the age of 16 but some "local" units of the organization who might have recruited them. He said the child recruits are being immediately sent back home. Dozens of Kurdish families have been staging a sit-in protest in the southeastern Turkish province of Diyarbakır since May 19, demanding the PKK return their children. Only a 16-yearold girl was found by Turkish security forces in an operation against the terrorist organization and reunited with her family who participated in the Diyarbakır protest. Families denounced the PKK and Peace and Democracy Party (BDP), an opposition party affiliated with the terrorist organization whose officials claimed the families were paid by the intelligence. On Wednesday, seven families supporting BDP started another sit-in in Diyarbakır in front of the provincial government.
Those families claimed children's joining the PKK were the result of government's policies towards the Kurdish community.
RELATED TOPICS