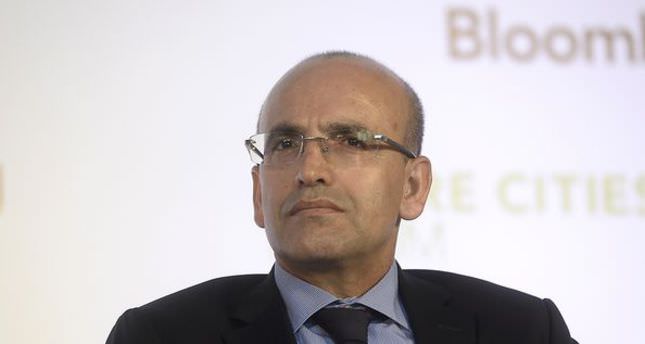 by AA Jun 22, 2014 12:00 am
A possible clash of authority between the government and the upcoming president will reverse the progress Turkey has shown for the last 20 years, Turkish Finance Minister Mehmet Şimsek said on Saturday.

"The worst thing that we can get is political instability and a dispute between the presidential palace and the government. Strife may take us back to the 90s," Şimşek told Turkish Channel 7.

Turks will go to polls on August 10 to choose their first popularly-elected president. If no candidate can secure more than 50 percent of the votes in the first round, a runoff will be held on August 24 between the top two candidates.

"When held by a opposition figure, presidency is a high ranking office that has the capacity to obstruct government works," Şimşek said.

Turkey's two main opposition parties CHP and MHP agreed to put up Ekmeleddin Ihsanoglu as their joint candidate in the election. Ihsanoglu is an experienced academic and diplomat, who stepped down in December as Secretary-General of the Organisation of Islamic Cooperation.

The ruling AK Party has not announced its candidate yet, but it appears likely that Prime Minister Recep Tayyip Erdoğan will run for president.

"I don't know anybody who deserves the presidency more than our prime minister in this country. He rescued the country from the verge of a cliff and attempted to resolve its most complicated problems, instigating a transformation," Şimşek said.