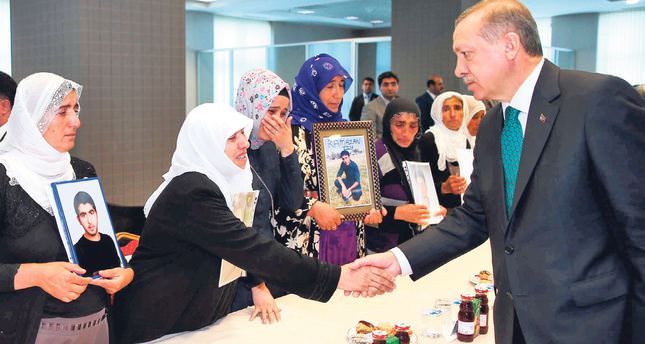 A group of Kurdish parents whose children were persuaded to join the terrorist organization PKK met Turkish Prime Minister Recep Tayyip Erdoğan yesterday in the capital Ankara in their first meeting with politicians, seeking assistance for the return of the children

Mothers of children kidnapped by the terrorist PKK, who have been demonstrating for weeks with mixed success, spoke with Prime Minister Erdoğan yesterday and asked him for help. Twenty mothers and 14 fathers at the meeting said they were encouraged by Erdoğan's stance.

Twenty mothers and 14 fathers who were among those staging a sit-in protest in the southeastern province of Diyarbakır held a closed-to-press meeting with Erdoğan.

The PM reportedly spoke to the families about his government's reconciliation process and its contribution to "peace in the region." Members of the cabinet including the deputy prime minister, minister of Family and Social Policies as well as AK Party officials and lawmakers from Diyarbakır attended Erdoğan's meeting with mothers at the AK Party headquarters. The families continued talks with ministers after Erdoğan left to attend another meeting in Ankara.

Speaking on behalf of families after the meeting, Erhan Eren, whose 19-year-old brother Fatih joined the PKK, said the prime minister listened to families and took notes regarding the children. He said the prime minister "instilled hope" in the families though he did not elaborate on what they said during the meeting. Eren said their next meeting will be with officials from the opposition Republican People's Party (CHP).

Eren stated that the grieving mothers "smiled for the first time" and left the AK Party headquarters "with hope." Adile Aksoy, whose sister was recruited by the terrorist organization, said Erdoğan told them that the government was "working on a new law on the issue and would submit it to the parliament soon."

Prior to the meeting, Erdoğan addressed his fellow AK Party lawmakers and said the government was "mobilized" to support the mothers. "All political parties have responsibilities toward those families, particularly the Peoples' Democracy Party (HDP) and Peace and Democracy Party (BDP)," he said, referring to two opposition parties with links to the PKK. Erdoğan criticized parties for ignoring the outcry of parents.

The prime minister also addressed the ambassadors from the EU member countries at a meeting after his talks with the Kurdish parents and criticized the EU as well for ignoring the families' ordeal. "I wonder how many people from EU countries took an interest in the cause of those families. These people shed tears for their children who were forced to join the PKK.It breaks one's heart to see them crying," he said.

Erdoğan said his government truly respected human rights while the PKK "whose supporters have a party in the Parliament" do not. "They forced those families to leave the place they staged the protest, in front of Diyarbakır city hall, they threatened those families and finally, they accused them of receiving payments from the intelligence service," he said.

Families decided to hold talks with politicians and NGO officials in Ankara after their sit-in protest in Diyarbakır, which began in May and yielded little result. Prime Minister Recep Tayyip Erdoğan had previously called on parties affiliated with the PKK to negotiate the release of families' children and implied that Turkey would launch military action to bring back the children if the BDP and HDP failed. Those parties, on the other hand, blame the government for the children's recruitment by the PKK due to the "failed reconciliation process" and BDP co-chairman Selahattin Demirtaş had stated the families were paid by "intelligence services" to help Erdoğan garner Kurdish votes.

The PKK denies it recruits child militants but a girl and a boy at the ages of 16 and 15, respectively, showed up recently after they were convinced to join the terrorist organization. Both were children of families attending the protest in Diyarbakır. The girl was captured in the security forces operation against the PKK while the terrorist organization itself released the boy last week.
RELATED TOPICS