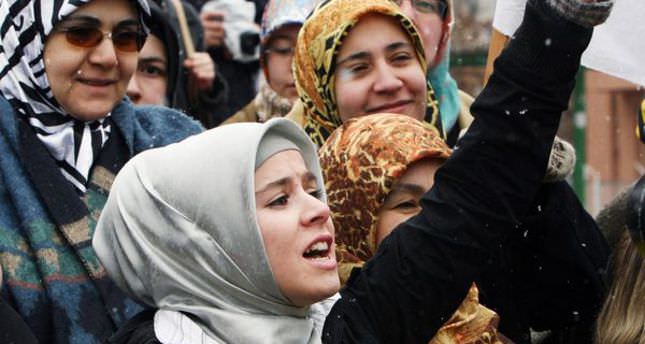 by AA Jun 26, 2014 12:00 am
The Constitutional Court decided yesterday that the rights of a female lawyer who was banned from entering a courtroom for wearing a headscarf were violated, setting a precedent for lawyers attending court hearings.

Turkey's Constitutional Court ruled yesterday that rights of a female lawyer wearing headscarf were violated when she was not allowed into a trial.
A female lawyer filed a case after she was barred from a trial because of her headscarf.

The Constitutional Court, composed of 17 judges, ruled 16-1 that the lawyer's rights had been violated. The court's refusal to allow headscarf-wearing women into trials violates equality and freedom of religion and is contrary to the Turkish Constitution's Articles 10 and 24 to that extent, the ruling said.

The Council of State, the country's highest administrative court, had lifted a headscarf ban for lawyers in 2013 and allowed lawyers to register at the Bar Association with a picture showing them wearing headscarf, on the grounds that the ban contradicted the constitution which grants freedoms.

Turkey, a secular country with a large Muslim population, has seen the headscarf ban first applied commonly in 1984, but the ban was not enforced uniformly until 1997, the year that Turkey's "postmodern coup" occurred.

The army and bureaucrats, representing the country's secular elite, had started a campaign against the headscarfwearing women and effectively
enforced the ban.
Last Update: Jun 26, 2014 1:37 am
RELATED TOPICS