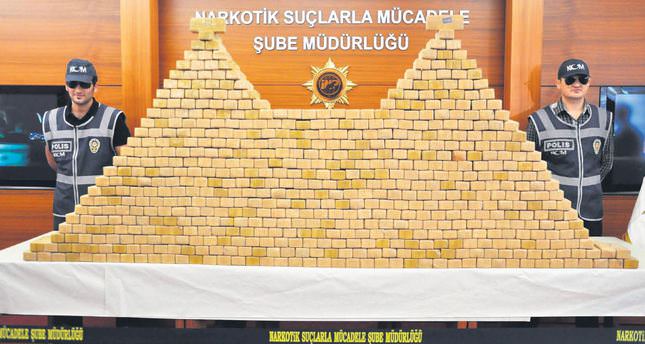 The United Nations Office on Drugs and Crime (UNODC) released its annual report for 2013 on drugs and counter-narcotic efforts on the occasion of International Day Against Drug Abuse and Illicit Trafficking. Turkey is among countries where drug seizures by law enforcement increased but like other countries, face the threat of "psychoactive" drugs, cheap synthetic substances more lethal than conventional drugs.

Assessing the report, Professor Sevil Atasoy from Üsküdar University said the report cited that Turkey continued to act as a gateway for Afghan opium though its popularity among drug traffickers decreased as the drug trafficking routes has diversified over the years. "This is due to increased counter-narcotics efforts by the security forces resulted in a higher seizure rate of drugs," Atasoy said.

She stated that although Turkey has succeeded in drug seizures, it faced the problem of psychoactive drugs, particularly Bonzai or Phenazepam, whose abuse often end in death. "Bonsai is composed of various synthetic chemicals affecting the central nervous system. Turkey was among the first countries to detect its addictive nature and warned against its dangers but it has been used in our country since 2008," she said.

Further on Bonzai's effects, Professor Nevzat Tarhan, president of Üsküdar University, said synthetic drugs often led to sudden deaths but they were still popular among drug users. "Access to Bonzai is easy. It is cheap and thus, popular among the youth. We face a drug epidemic that we should take seriously," he said.

On Turkey's role as a major gateway for drug trafficking, Professor Atasoy said the country was located between Afghanistan and Europe, where suppliers and buyers are respectively, and a neighbor of Iran and Syria where chemicals are developed. "For instance, metamphetamine from Iran is transported to Eastern Asia through Turkey although it is in the reverse direction. This is because Turkey is home to many air routes and ports
facilitating the transportation. So, Turkey is under constant danger from drug trafficking," she said.

According to statistics provided by the Turkish National Police, drug use among the youth remains high. Nine percent of high school students surveyed by the police admitted using drugs at least once. Although the number of addicts increased, number of those seeking treatment also increased in Turkey according to the Health Ministry figures.