Man attempting to take down Turkish flag shot by police 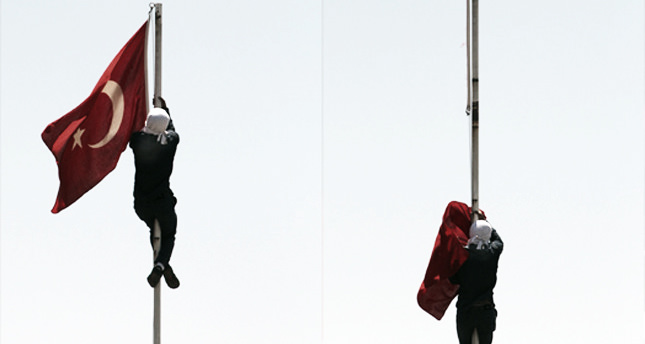 by Daily Sabah Jun 28, 2014 12:00 am
A man who attempted to take down a Turkish flag at Istanbul's Gaziosmanpaşa Police Department on Saturday, was reportedly shot in the leg after he resisted to police with a knife.

According to initial reports, Ali Öçgün first went to Küçükköy Private Asya Hospital and took down the Turkish flag from a post outside the building. The suspect later went to Gaziosmanpaşa Police Department and took another flag down at the police station.

However, when Öçgün attempted to take down the second flag he was shot in the leg after he avoided officers' call climb down from the post and surrender. The suspect was taken to Haseki Research and Education Hospital for treatment.

Earlier this month, a young man took down a Turkish flag inside a military compound during protests in Turkey's southeastern province of Diyarbakır. The incident sparked fire in all segments of the society and military personnel at the scene of incident were criticized for not preventing the suspect from taking down the flag.