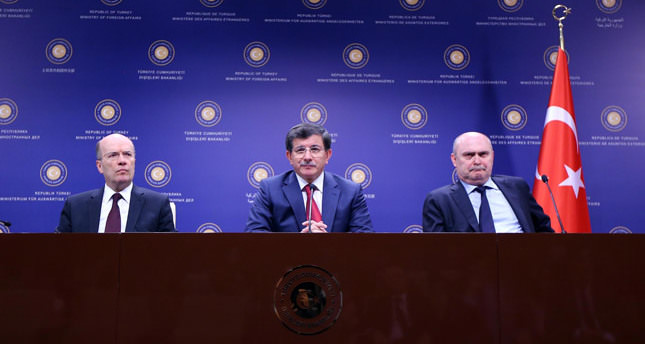 Speaking to reporters in Ankara, Foreign Minister Ahmet Davutoglu said they have spent many sleepless nights waiting for the release of the captive drivers. The truckers were heading toward Irbil, the capital of the semi-autonomous Kurdish region of northern Iraq, and would be flown later to Ankara.

The drivers were well, although one may need special treatment, he added, without elaborating or giving any details about their release.

Militants from the extremist group known as the Islamic State of Iraq and al-Sham seized them June 9 in Mosul, Iraq's second-largest city. Three days later, they took another 49 people from the Turkish consulate in the city.

Davutoglu said efforts were underway to secure the release of the Turks still in captivity.

"The critical process continues," he said. "Our prayers and our efforts will go on for the rest of them and, God willing, we will share such good news about them too as soon as possible."

The militants' takeover of Mosul was the opening act of a bold offensive that has brought much of northern and western Iraq under their control. The assault has eased in recent days since encountering stiffer resistance in Shiite majority areas.

The rapid pace of the advance took the Iraqi government and international community by surprise, as the country's military melted away in the face of the onslaught.

It also left 46 Indian nurses stranded at a hospital in the militant-held northern city of Tikrit. The nurses are safe but are being forced to move to a new area controlled by the militants, according to Indian External Affairs Ministry spokesman Syed Akbaruddin.

He also said 40 Indian construction workers abducted two weeks ago near Mosul were still being held, but were unharmed.

The militant group's gains in Iraq add to the vast territory it already controls across the border in northern and eastern Syria. The fighters have pressed their offensive against pockets of rival rebel fighters still holding out against them in eastern Deir el-Zour province, which borders Iraq.

On Thursday, the militants barreled through towns and villages along the Euphrates River, as rebel factions affiliated with tribes in the area gave up the fight.

Activists said the group is now in almost full control of a corridor stretching from the Syrian border town of Boukamal to the government-controlled provincial capital of Deir el-Zour to the northwest.

The moves consolidate the territory held by the group, which has shortened its name to the Islamic State.

Led by an ambitious Iraqi militant known as Abu Bakr al-Baghdadi, the group this week unilaterally declared the establishment of an Islamic state, or caliphate, in the lands it controls. It also proclaimed al-Baghdadi the head of its new self-styled state governed by Shariah law and demanded that all Muslims pledge allegiance to him.

The majority of significant Syrian rebel groups that have been fighting to overthrow President Bashar Assad have rejected al-Baghdadi's declaration. The rebel groups, including the al-Qaida-linked Nusra Front, have battled the Sunni extremist group since the beginning of the year. Nearly 7,000 people, mostly fighters, have died in the clashes.

However, the Nusra Front appears to be losing the war within a war in Syria as fighters allied with powerful tribes in eastern Syria defect to al-Baghdadi's group.

On Thursday, activists posted a video showing a man in the town of Sheheil, a Nusra Front stronghold, reading a statement, saying: "We have decided to declare our allegiance to the Islamic State and the Caliph of the Muslims, Abu Bakr al-Baghdadi."

Another video showed what appeared to be fighters in nearby Ishara, saying they were ending their battle against al-Baghdadi's group.

"The clans of the city of Ishara, and the villages around it ... and all of the factions in these areas ... announce before God that they will cease fighting with the Islamic State," a man says, reading a statement in a courtyard with several other tribal elders. The videos appeared to be genuine and matched Associated Press reporting from the area.

The Deir el-Zour Coordination Committees, a collective of activists in the area, confirmed that militants had entered the town of Mayadeen and Ishara after other rebel fighters withdrew.