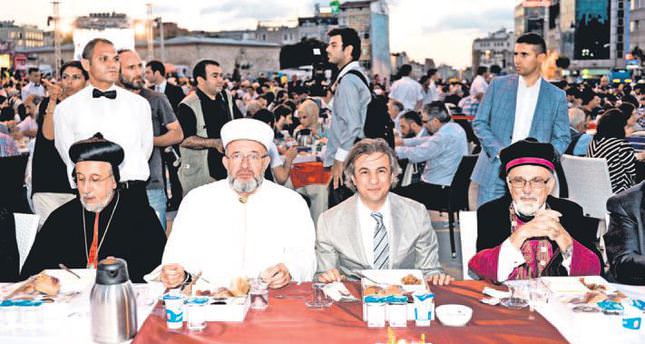 by AA Jul 04, 2014 12:00 am
Taksim Square, at the heart of Istanbul, hosted an iftar meal on Wednesday on the occasion of Ramadan that brought together 3,000 people, including representatives of different religious communities. Ahmet Misbah Demircan, mayor of the Beyoğlu district where the square is located, gave the iftar meal - the evening fast-breaking meal in the month of Ramadan.

Along with Istanbul residents, the city's top authorities including the governor and Istanbul mayor, dignitaries from the business world, artists, Istanbul consulates generals of several countries and representatives of the Syriac Orthodox, Jewish and Armenian communities attended the dinner. Prior to the meal, a performer sang nasheed (chants).

Speaking to reporters at the dinner, Istanbul Governor Hüseyin Avni Mutlu said the dinner marked "a unity of hearts ... It brought together members of different communities in our society. I wish Ramadan will bring peace and calm to our country, will unite us all and end any resentment amid people," he said. Mayor Demircan said the iftar dinner "showed people from different faiths - Muslims, Christians and Jews or those from different ideologies can share God's blessings."

Yusuf Çetin, Metropolitan Bishop of the Syriac Orthodox Church, said they congratulated Muslims' Ramadan and described iftar as "a circle of love bringing all together."

Taksim Square, a prominent landmark in Istanbul, was notorious for the protests at its adjacent Gezi Park in 2013 and other rallies forcefully dispersed by the police in the past years. It remains closed to any kind of assembly with the exception of Wednesday evening's dinner.
RELATED TOPICS