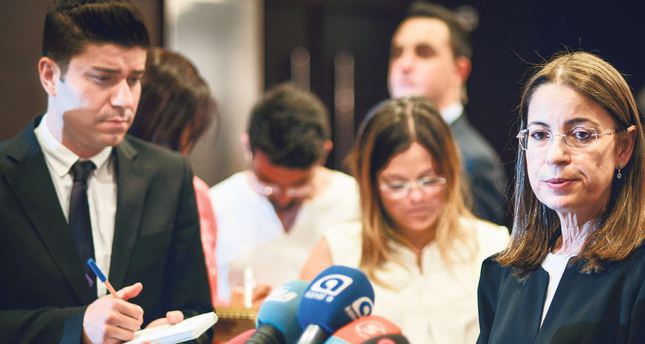 Minister of Family and Social Policies Ayşenur İslam stated that the moral values should be better taught to prevent domestic violence which killed three women on Thursday, noting legal regulations were already in place to curb the violence

The murderer of three women by their husbands in as many days has brought to the forefront problems of domestic violence against women in Turkey, with the government initiating an education drive to prevent a repeat of such crimes. The three murders that occurred in Istanbul, the western city of İzmir and southern city of Adana made the headlines on Thursday.

In İzmir province, Şadiye Aslan was shot dead by her husband Ayhan Aslan. The couple, who have five children, broke up one week ago after they argued over Aslan's jealousy. The husband threatened his wife's life and beat her. The victim moved in with her parents and took their children with her. Ayhan Aslan met her after their fight and convinced Şadiye to return home. But as soon as she returned, the couple started arguing over the woman's correspondence on a social media website. The husband drew his pistol and fired four times. The young woman died at the scene.
Ayhan Aslan told police he killed his wife because she "cheated on him."

Dilek Balsak had asked for police protection two months ago after she was injured when her husband, an ex-convict, threw her out of the window of their second-floor home. Because of threats by her husband İhsan, the woman withdrew her request for protection and returned the panic button used for emergency dispatch delivered to domestic abuse victims. İhsan Balsak told his wife they would go shopping together but he was planning to murder her. The couple started arguing inside the man's car over his wife's alleged cheating. Balsak pulled out a shotgun in the car and shot the woman in stomach. He later left the injured woman at a hospital where she succumbed to her wounds. The suspect remains at large.

The third case was in Istanbul's Sancaktepe district. Sibel Kazankaya was seeking for a divorce from her husband of 17 years due to irreconcilable differences. She left home and moved in with her parents. Her husband, Ali, stopped the woman as she was walking to work on Thursday and an argument broke out. Grabbing her hair, the husband dragged his wife on the street for a while, then, putting the barrel of his gun into her mouth, he pulled the trigger. Sibel Kazankaya died at the scene of the crime while the body of Ali Kazankaya was found in an alley near the scene where he had committed suicide. Officials said there was a restraining order against the husband because of previous domestic violence complaints.

The official number of women killed by their husbands or partners varies due to the lack of conclusive statistics. A nongovernmental organization says 60 women were killed by their husbands in the first six months of 2014 and 12 percent of them were murdered when they were under police protection. Another organization monitoring violence against women says 114 women were killed and 21 had filed criminal complaints against their attackers. In the face of an alarming rise in violence targeting women, the government took steps encouraging women to voice their complaints and offered constant police protection for domestic violence victims.

Minister of Family and Social Policies Ayşenur İslam told reporters on Friday that all measures were in place to protect female victims of domestic violence but that most women fell victim to spousal murders after restraining orders or police protection were lifted. İslam stated that the government and Parliament determined measures to fight domestic violence and implemented them sufficiently enough through laws that impose heavy sentences. "The penal system does not have an apparent fault. Our ministry either offers shelter for women applying to us with a complaint of domestic violence or coordinates with other agencies for their protection," she said. İslam points out that they also initiated an education campaign against domestic violence but, "apparently it failed on several levels ... Violence is rising in the world and this is the case in Turkey. What we need to do is boost education campaigns. This is not something that our ministry can achieve alone. We need a nationwide campaign to teach people about moral values," she said, adding, "We need a change of mindset."
RELATED TOPICS