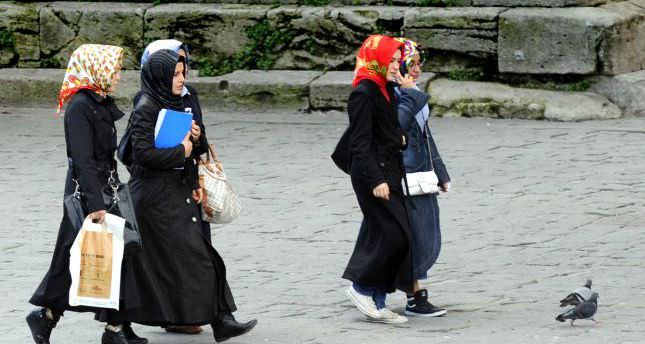 by Daily Sabah Jul 07, 2014 12:00 am
The Constitutional Court's ruling regarding the violation of the rights of a lawyer who wore a headscarf when she wasn't allowed into a court room is based on the judgment that the ban violates religious freedoms, according to the full verdict.

Turkey's Constitutional Court, once known for its staunch opposition to headscarf-wearing women, having describing the headscarf as a political and anti-secular symbol, issued a landmark ruling that deemed it as part of religious freedom.

The court ruled in June that the rights of Tuğba Arslan, a headscarf-wearing lawyer, were violated when she was banned from attending a hearing while wearing it. The court released its full verdict on Saturday. In its preamble to the verdict, the court said the headscarf was regarded as a political symbol by its critics while it was a religious duty for those wearing it. The court said there was no evidence about its use as a symbol that would "impose pressure on those opposing it."

The court said banning the headscarf merely on the assumption that it would threaten the secular order was wrong and it was the state's duty to ensure freedom of faith and religion for the majority and minorities instead of restricting rights and freedoms. In its verdict, the court said that religion cannot be suppressed by a strict interpretation of secularism. It continued saying that another interpretation of secularism could allow the coexistence of religion and a secular order and that a secular state must have an equal approach to religions and faiths to ensure an order in which individuals could freely learn about religion and live by the obligations of their faiths.

In its verdict on June 25, the Constitutional Court, composed of 17 judges, ruled 16-1 that Arslan's rights had been violated when she was not allowed into a Supreme Court trial because of her headscarf. The court had said the ban violated equality and freedom of religion, contrary to the Constitution's Articles 10 and 24.

The Council of State, the country's highest administrative court, had lifted a headscarf ban for lawyers in 2013 and allowed lawyers to register at the Bar Association with a picture showing them wearing a headscarf on the grounds that the ban contradicted the Constitution which grants those freedoms. However, some judges ordered headscarf-wearing lawyers to leave the courtroom as the laws did not clearly state that they were allowed to wear headscarves in the courthouse.

The abolition of the ban came after the government announced that civil servants will be allowed to wear headscarves in a landmark move in 2010 when the ban was lifted for university students.

The Constitutional Court itself had interpreted the headscarf as a political and antisecular symbol in separate cases in 1989, 1991, 2008 and in trials for the closure of two parties associated with "political Islam" by their critics.

Turkey, a secular country with a large Muslim population, saw the first headscarf ban applied commonly in 1984, but the ban was not enforced uniformly until 1997, the year that Turkey's "postmodern coup" occurred.

The army and bureaucrats, representing the country's secular elite, had started a campaign against headscarf-wearing women and effectively
enforced the ban.
RELATED TOPICS