Turkish border gates closed due to strike in Greece 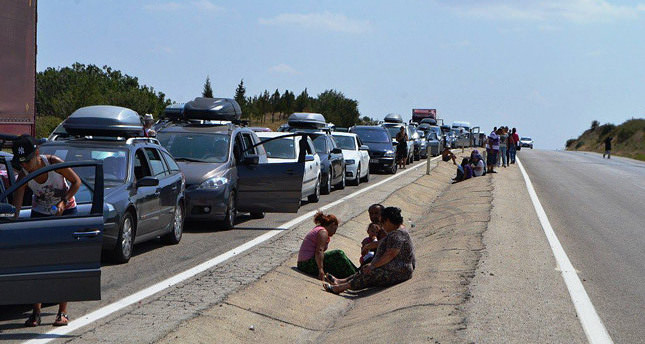 by Daily Sabah with Agencies Jul 09, 2014 12:00 am
Border crossings from Turkey's Ipsala and Pazarkule were closed on Wednesday morning after thousands of Greek civil servants launched a 24-hour strike over job cuts, when the country's international lenders were to begin an inspection visit.

Not only Turkish citizens but also Greeks were not able to cross the border. Those who wanted to cross into the neighboring country have been driving to Bulgaria and using the border gates there to enter into Greece.

Civil servants have opposed the government's plans to shrink the civil service through layoffs or transfers, saying unemployment will balloon to more than the current 26 per cent as the country struggles through a six-year recession.

Workers are expected to demonstrate through central Athens later in the day.

The civil servants will be joined by members of the Public Power Corporation union GENOP-DEH, private sector union GSEE and Communist Trade Union PAME for a demonstration outside parliament, as lawmakers debate a draft bill on the privatization of the electric utility company.

PPC carried out strikes last week in response to the austerity measures, insisting the country's electricity supply should stay under state control.

The walkout caused widespread power cuts on the mainland.

Inspectors from the European Commission, European Central Bank and International Monetary Fund have arrived in Athens to continue inspections on the progress of reforms. These include the privatization of the country's energy market for the release of a further 1 billion euros (1.36 billion dollars).

Cash-strapped Athens, which depends on its bailout payments to stay afloat, has repeatedly struggled to stick to its reform timetable.

Officials are scheduled to meet with the newly appointed finance minister, Gikas Hardouvelis, on Thursday.