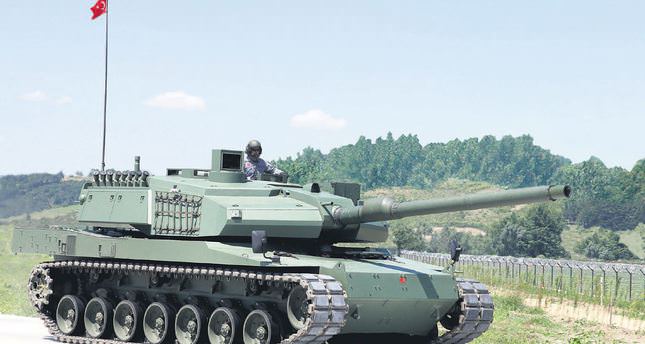 A tender to build the ALTAY, Turkey's first domestically designed and produced main battle tank, is expected to commence after the presindential election

Turkey's military procurement agency, the Undersecretariat for Defense Industries (SSM), is expected to hold a tender for the country's first national tank, the Altay, after the presidential election. According to sources from the defense industry, SSM has completed all preliminary preparations for the multi-billion dollar tender that will determine the serial producer of the Altay, which is the official name of Turkey's future main battle tank (MBT). The tender is expected to be scheduled after the presidential election that will be held in August.

Defense industry sources believe that Koç Group company Otokar, the main contractor for the Altay MBT development program, seems to be the likeliest company to win the contract; however, other Turkish companies, such as BMC and FNSS that have experience in the production of armored vehicles, are also believed to have a chance in winning the tender.

Altay is the third generation of the MBT, Turkey's first indigenous tank development program. The tank is named after Army General Fahrettin Altay, who commanded the V Cavalry Corps during the Turkish War of Independence.

SSM awarded Otokar the $500 million (TL 1.06 billion) contract, which includes design, development and integration of the Altay and qualification of the tank through prototypes and testing in 2007; the first prototype was publicly revealed in 2011.

Under the Altay project, Aselsan, a Turkish defense industry giant, will be producing the new generation fire-control system and the command and control information system of the tank, while with technology transfer from South Korea's Hyundai Rotem, the Turkish Mechanical and Chemical Industry Corporation (MKE) will develop the 120-millimeter gun and ROKETSAN, the modular armor of the tank.

However, the manufacturer of the engine still remains unclear, and this uncertainty raises some questions about the project. The candidates for the engine are German MTU Friedrichshafen and the new South Korean engine that is currently under development. In addition, in 2013 Turkey started to negotiate with the Japanese company Mitsubishi Heavy Industries for joint development of the engine for the prospective MBT the Altay, but it has been announced that Turkey refused joint development with Japan in recent months. Meanwhile, procurement officials said that Turkey aims to replace its German engine with a new Turkishdesigned engine.

The SSM will prepare and execute a separate order for the first lot of 250 tanks. A total of 1000 MBTs are to be produced in four separate lots of 250 units. Every delivered lot is expected to have additional upgrades. If Otokar wins the tender, the company expects to start mass producing Turkey's first domestically manufactured tanks at either the end of 2016 or the beginning of 2017.
RELATED TOPICS