Social problems emerge with rise in number of Syrians in Turkey 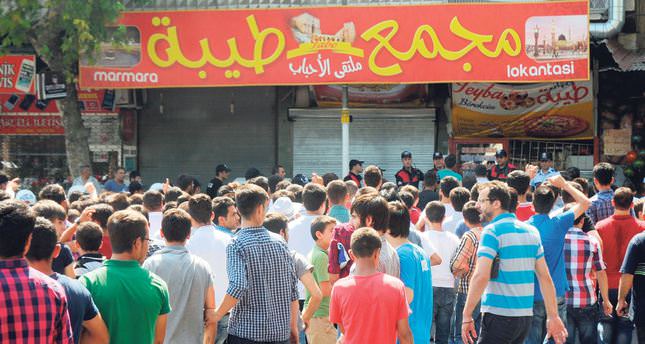 As Turkey struggles to cope with the ever increasing number of Syrians taking shelter in the country, inevitable hostile sentiment against "criminal" Syrians bubble up particularly in border cities and have evolved into anti- Syrian riots, the latest of which was in the city of Kahramanmaraş

Syrian refugees who fled violence in their country are being accused of involvement in mostly petty crimes by locals in the southeast, creating a serious social problem that affects the whole of society. The incessant influx of Syrians that the Turkish government describes as "guests" paved the way for growing disapproval by the Turkish public that sometimes borders on racism, even in the most minor criminal incidents involving Syrians.

Mob mentality lately came into play in the southern city of Kahramanmaraş that hosts a sizeable Syrian community when a group interacting through social media websites took to the streets on Sunday.

Claiming Syrians in the city commit crimes and cause unrest - about 1,000 people targeted everything Syrian in the city. Most of them were young people and the protest quickly escalated into a riot that had nationalistic undertones as members of the group fervently waved Turkish flags and chanted, "We don't want Syrians here."


The police intervened to disperse the crowd, who blocked streets in central Kahramanmaraş, but scuffles broke out when they refused to disperse.

Following the scuffles, the crowd splintered into smaller groups and marched into neighborhoods with a concentration of Syrians. Among their targets was a car occupied by a Syrian family. The crowd attempted to lynch the family but they managed to flee thanks to the police. As the groups advanced, riot police fired water cannons on the group who hurled stones at the police in return. Among other targets of the angry crowd were shops with signs in Arabic, tearing down the signs leading the concerned shop owners to close down for the day.

Riots against Syrians in this calm, southern city near the border with Syria, are reminiscent of past incidents targeting Turkey's guests from south of the border.

Gaziantep, another Turkish city located on the border, has seen attacks against Syrians, allegedly over an attack targeting Turkish children. Two dozen Syrians had to leave the city as the angry crowds ransacked the places where they lived.


Turkey is the primary host for Syrians refugees who have taken shelter due to the civil war in Syria. Praised for exemplary conditions, Turkey provides Syrian citizens with tent camps and state-of-art "container cities," although the Turkish government has had difficulty looking after others who are unable or unwilling to stay in crowded camps.

The country has already spent over $2.5 billion (TL 5.3 billion) to accommodate and help Syrians so far but it is overwhelmed as the international community remains reluctant to help Turkey to cope with the surge in number of people fleeing the conflict in Syria.

Twenty- two refugee camps across the Syrian border can accommodate only a small fraction of the desperate people seeking shelter, which is currently slightly above 218,000. Though more tent camps are planned, it is obvious that with a figure above 1 million, larger than the populations of many border cities, Turkey will continue to confront more problems as long as the conflict continues.


While those with a relatively good income start up new lives in Turkish cities by setting up businesses and buying houses, most Syrians displaced by the conflict are those from low-income families. They live in squalid conditions in abandoned buildings and parks and work for long hours in low-paying jobs without any social security.

With their numbers growing, prejudice against them, common in countries open to refugees and the displaced, is growing as well in Turkey. Add to that provocateurs seeking to incite tensions and fertile ground to start riots against Syrians, particularly in the border cities, emerges.

Speaking to Daily Sabah on the issue, Ali Köse, a sociologist and founding chairman of YESO-DER, an association of Turkish sociologists, said the incident in Kahramanmaraş was a culmination of what they were afraid of, that is riots against Syrians.

Citing a report by the Turkish NGO Mazlum-Der, Köse said the number of Syrians living in Turkey exceeded 1 million according to official figures but might be well near 2 million unofficially.

"Certainly, Turkey is obliged to embrace all those people in a humanitarian sense. On the other hand, if you don't have a program to respond [to the influx of Syrians] or a program with concrete steps to address this issue, it will obviously lead to problems. It is very challenging to provide education, social and other rights to over 1 million people," he said.


Köse said that Turkey established an authority for the management of immigration only fairly recently. "Institutions certainly cannot handle this issue without any problems, especially at this point," he said. He said that women and children were particularly vulnerable. For women, cases of forced prostitution, being married off to elderly people, child marriages and entering into polygamous marriages were among the main problems.

These issues have triggered outrage in the public in Turkey as well, according to Köse who said that "the desperate women who resort to prostitution in particular angers locals."


Secondly, public anger against Syrians stems from economic reasons, Köse said. "Many of these people work for the lowest wages, especially in big cities. Syrian beggars became a common sight. Turkish employers prefer Syrian refugees instead of Turkish hopefuls because they are ready to work for minimum wage. [The presence of Syrians] poses a major problem in terms of unemployment. Syrians work without social security.

In the end, they become victims of the exploitation of cheap labor," he said. "Anger over Syrians has multiple facets in this sense. For the young and the unemployed, Syrians take their jobs, for women, they become their co-wives," he added. Köse said the issue lacked a solution at this point. "It is at a deadlock. People's anger is rising and it may raise more. Measures may not be sufficient to prevent such riots," he said.

For the part of Syrians, Köse said "increasing outrage towards them might force some Syrians to return home despite the ongoing conflict. For those preferring to stay, public anger will hurt their chance for integration into Turkish society," Köse said.

The report by Mazlum-Der-that Köse cited- paints a grim portrait of Syrians' situation in Turkey. Lack of socio-economic measures for Syrians not living in camps has led to serious problems according to the report. Obligatory settlement of Syrians in a random manner across cities faced with an influx of refugees has contributed to issues related to Syrians in terms of social texture, according to the report.

Mazlum-Der has called on authorities to take measures against the inhumane exploitation of Syrians and to launch a well-planned integration process.