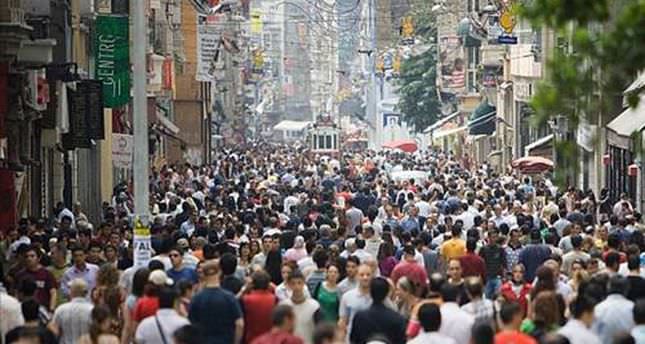 Turkey has the largest young population with 16.6 percent compared to European countries

Turkey has witnessed several demographic changes over the past few decades that have changed the age composition of its population, Turkish Statistical Institute's (TurkStat) figures released Friday.

The report, issued by the Turkish Statistical Institute for the annual World Population Day on 11 July, to raise awareness of global population issues, said up to 17 percent of the population in Turkey are in the 18 to 24 age group and they are increasingly looking to the government to help secure a prosperous future for themselves.

In 1989, the UN recommended that 11 July be observed worldwide as World Population Day to focus attention on the urgency of population issues in the context of overall development plans in order to find solutions for overpopulation issues. World Population Day was inspired by the interest in Five Billion Day on 11 July 1987 – approximately the date when the world's population reached five billion. This year's theme is "Investing in Young People".

"The world today has its largest generation of youth in history – 1.8 billion young people, mostly in developing countries – with enormous potential to help tackle the major challenges facing humanity. But too many are denied their rightful opportunities to get a quality education, find decent work, and participate in the political life of their societies," UN Secretary General Ban Ki-moon said in a message on the occasion of World Population Day, according to the UN website.

"Action is urgently needed. Too many young people lack resources they need to lift themselves out of poverty...By empowering today's youth, we will lay the groundwork for a more sustainable future for generations to come," Ban added.

As the world population edged to 7 billion in 2011 – up from 2.5 billion in 1950 – it has had profound implications for development, with effects on sustainability, urbanisation, access to health services and youth empowerment.