Israel condemned in protest outside its embassy in Turkey 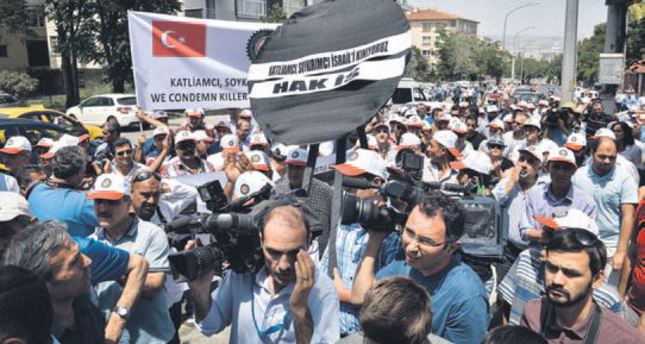 by Jul 16, 2014 12:00 am
Hundreds of Turks protested yesterday in front of the Israeli Embassy in Ankara and left a black wreath to condemn the deaths of 208 Palestinians by the Israeli military in the past 10 days. Meanwhile in Istanbul, activists in Sultan Ahmet Square distributed leaflets denouncing Israeli policies in
Gaza.

A group of Turkish demonstrators denounced Israel's attacks in Gaza that has left 208 Palestinians dead. Demonstrators from the Confederation of Turkish Real Trade Unions (Hak-İş) gathered in front of the Israeli embassy in the capital Ankara yesterday. Unfurling a banner reading "Israel is killing again," demonstrators left a black wreath at the gate of the embassy.

Speaking on behalf of protesters, Hak-İş President Mahmut Arslan said they condemned "Zionist" Israel's new blockade of Palestine and the "massacre of civilians by air raids." "Humanity, the international community remains silent in the face of this tragedy, this invasion, this genocide. International bodies like the United Nations Security Council, NATO, the European Union, the Organization of Islamic Cooperation and the Arab League should stop it and show they are honest institutions when it comes to Israel," Arslan said in the statement.

In a related development in Istanbul, a group of activists converged on the city's Sultanahmet (Blue Mosque) Square, a popular destination among tourists and informed those present about Israel's attacks.

One of the activists, said they were determined to convey Israel's "oppression" of Palestinians. "We have leaflets in several languages and we tell people about Israel's brutal attacks against Palestinians and make the voice of Palestinians heard," he said.
Last Update: Jul 17, 2014 12:06 pm
RELATED TOPICS