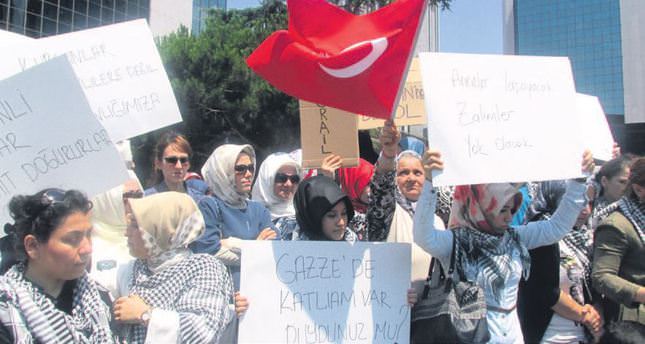 A group of activists from the Women and Democracy Association (KADEM), a leading nongovernmental organization, staged a protest outside the Israeli consulate in Istanbul's Levent district yesterday.

Demonstrators, led by KADEM President Sare Yılmaz Aydın, protested against Israel's Gaza offensive that has killed at least 190 Palestinians over the past week and remarks by a female Israeli lawmaker inciting hatred against Palestinian civilians.

Women carried banners denouncing Israel and Ayelet Shaked, an Israeli lawmaker who caused outrage with her remarks on Palestinians. They left a black wreath at the consulate dedicated to "Miss Hitler," Ayelet Shaked.


Among the demonstrators was Esra Albayrak, daughter of Prime Minister Recep Tayyip Erdoğan. Albayrak told reporters she hopes the violence in Gaza would end. "We are here to demonstrate our civil resistance [to attacks in Gaza]," she said.

Making a statement on behalf of KADEM activists, Sema Silkin said they primarily protested Shaked's remarks "at a time when women and children comprised most of the casualties.

"Her remarks came at a time of Israel's collective punishment of Gaza, resumption of divisive and racist policy that escalated into an all-out massacre and they were openly calling for genocide. She reminds us of Nazis for this call to extermination."


Moreover, we are ashamed of her as a women. Men sow the seeds of wars and women suffer most. A woman who should stand up against suffering calls for more suffering to be inflicted upon people; this is the fruit of a warped mind," Silkin said.

She added that they called on Shaked to adopt rhetoric of mercy and passion. "A female politician who is supposed to have more commonsense and responsibility disappointed us with her hate-filled remarks. As long as this kind of hate speech is inciting genocide against Palestinian women and children, KADEM will not remain silent," Silkin said in the statement.


On Monday, Shaked, a member of Israel's Knesset from Jewish Home party, quoted on her Facebook page: "Behind every terrorist stand dozens of men and women, without whom he could not engage in terrorism. They are all enemy combatants, and their blood shall be on all their heads. Now this also includes the mothers of the martyrs, who send them to hell with flowers and kisses. They should follow their sons, nothing would be more just. They should go, as should the physical homes in which they raised the snakes. Otherwise, more little snakes will be raised there."
Last Update: Jul 16, 2014 11:07 am
RELATED TOPICS