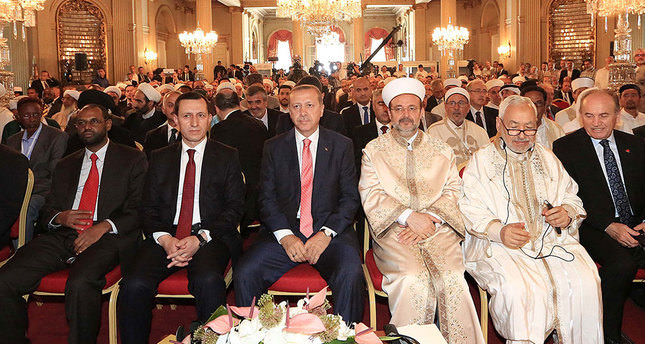 by Daily Sabah Jul 17, 2014 12:00 am
Prime Minister Recep Tayyip Erdoğan at the World Islamic Scholars Peace, Moderation and Commonsense Initiative on Thursday organized by the Turkish Directorate of Religious Affairs has given an influential speech calling the Muslim world to unite and act for the establishment of peace, leaving aside all sectarian differences.

Starting his speech with a referral to Surat Al-Hujurat from the Holy Qur'an, Erdoğan stated that God orders believers to make peace with each other as the entire Muslim nation is a single brotherhood, without any distinction for caste, creed or color and noted that it is crucial for Muslims to stop killing each other. "We cannot see the application of these orders throughout the Muslim world" said Erdoğan, who noted there is serious conflict in Syria, Egypt, Iraq, Palestine, Myanmar, Central African Republic and more. He added that Muslims are like brothers and sisters to each other and should not betray one another, lie to one another or steal their belongings, honor and lives.

Erdoğan also referred to the terrorist organizations which claim to act on behalf of Islam such as the self-proclaimed Islamic State of Iraq and al-Sham (ISIS) and criticized them for attacking and slaughtering fellow Muslims based on sectarian differences. He noted that it is crucial for Muslims to do self-criticism, with special emphasis on Muslim scholars and expressed the current situation in the Muslim world is one that is strictly forbidden by the Holy Qur'an as Muslims are killing each other on the one hand, while they remain silent as other Muslims are being killed.

Touching upon the issue of the current Palestinian crisis where over 230 civilians have been killed by Israeli attacks, Erdoğan condemned the world for remaining silent as there are many children and women among those who were brutally killed in the past week. He called the Israeli aggression "systemic genocide" and stated Israel especially attacks Palestinians during the holy month of Ramadan, a constantly reoccurring tragedy since the establishment of Israel. On the other hand, Erdoğan addressed the ineffective nature of the UN Security Council which is led by the permanent five members who all have a veto power to override decisions taken by the rest while the Muslim world does not have a representative. For instance, he referred to the council's decision regarding the Syrian conflict which was vetoed by Russia, a close ally of the Assad regime.

Emphasizing the need to criticize one's self instead of fully blaming the West for the issues in the Muslim world, Erdoğan stated it is easy to blame others for our problems while most people forget the fact that the Muslim world remains silent as Muslims are being killed throughout the world. "Don't you feel the pain suffered by Palestinians, oh Muslim world!" exclaimed the prime minister, who stated they turn a blind eye to the Palestinian issue because it does not involve sectarian conflict. He claimed humanity and honor of humans were dying in Palestine while stating that Turkey is not afraid of standing with the oppressed and the right ones. "If the Muslim world stood firmly in terms of the Palestinian issue, conflict in Afghanistan would not have aroused" said Erdoğan, who claimed there are certain countries which are satisfied with the conflict in Palestine for their own interests.

Erdoğan called on the Shia Muslims and told them it is necessary for them to put sectarian differences aside and not be disturbed when they hear name of Omar, who served as a Caliph after the death of Prophet Muhammad. "We should only recognize that we are all Muslims" said Erdoğan, who stated that they cannot stand idly when Muslims are killing one another and said it is about time that they say stop to oppressors and aggressors who shed the blood of their Muslim brothers and sisters for the sake of oil, gold, money and rulership. He stated that Turkey does not care about the sect of people killed in Syria while noting that while Turkey remains outside of the conflict, it is not impartial and is on the side of the oppressed.

"We want to put an immediate stop to the shedding of blood" Erdoğan exclaimed, calling all sides to be moderate. "Those who are chained by dollars cannot be scholars" he said, noting that scholars should always side with the just. He stated that all the conflicts in the Muslim world can be resolved if all Muslims put aside sectarian differences and stood for one another. "We know that peace, prosperity and solidarity are well deserved by the Middle East and are aware that all opportunities are present to establish this" said Erdoğan, inviting all sides to mediate, think and contemplate.

World Islamic Scholars Peace, Moderation and Commonsense Initiative was organized by the Directorate of Religious Affairs to call on the Islamic world to end bloodshed and chaos in the region, especially during the holy month of Ramadan, while noting that simply condemning the clashes in Iraq, Syria and the Muslim world is not enough. The initiative encourages Islamic scholars and Muslim wise men to immediately work to bring an end to violence in the region while leaving aside sectarian differences.