Over 50 pct of Turkey's youth subject to bullying, research reveals 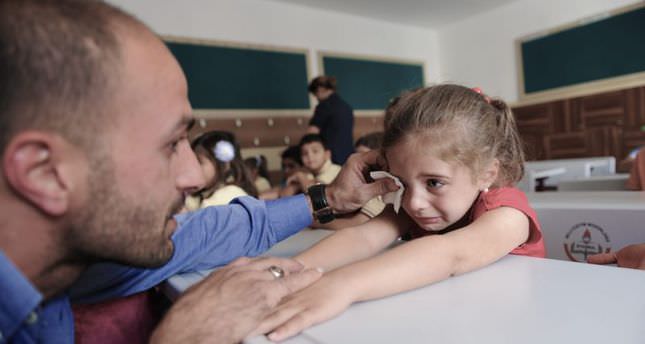 by AA Jul 18, 2014 12:00 am
Recent survey claims that 80 percent of Turkish teenagers describe themselves as being ?happy' and 'very happy' have been cast into doubt by new research which says that over half of Turkey's youth are the subject of physical and verbal violence at school.

Research released by the Turkish 'Genç Hayat Foundation' last week says that the country's teenagers-accounting for 16.6 percent of the total 70 million population - are experiencing bullying, which more than half the time (57 percent) is carried out by their peers.

Over half of this bullying takes place in the classroom or other parts of the school - with 'nicknaming' being the most common form of ?verbal violence', the research says.

In Turkey, verbal violence is the most common type of school bullying, followed by physical violence and isolating violence, a phenomena which varies with the gender of the students.

Female students face more verbal violence like being the target of sexual gossip or being ridiculed, although male students are exposed to more physical violence, the research notes.

Last month, the Family and Social Policies Ministry had published a recent survey on Turkish teenager profile, claiming that 80 percent of the Turkish youth described themselves 'very happy' and 'happy.'

However, nine out of ten teenagers in Turkey's highschools-5.4 million in total-are exposed to violence, according to the Scientific and Technological Research Council of Turkey.

Interestingly, only 4 percent describe themselves as 'unhappy' according to the Ministry's survey.

Almost all of the students surveyed said that they wanted to continue their education as they were satisfied with their teachers and school management - but seemingly unhappy about their relations with each other.

Coordinator of a three-year project to cut school bullying in Turkey, Aysuda Kolemen from Istanbul Kemerburgaz University says the most risky age range for being involved in bullying was between 7 and 15.

This might increase in the coming ages if not prevented, she added.

Kolemen says that conducting surveys and research over school bullying was still not common in most of the countries, including Turkey.

So far, the surveys revealed that the intervention of even one adult was enough to decrease the bullying rate of the teenager or the child, she said.

Kolemen also stressed that therefore, the rate of bullying was higher at schools of metropolitan districts.

The profile of bullying has increased and changed in recent years. From old-fashioned ideas of children physically fighting, the advent of social networking sites and smartphones has allowed bullying to take on a more secretive, subtle and intimidation form.

Four years ago, nine Massachusetts teens were indicted for driving a 15-year-old "new girl" from Ireland to suicide by cyber bullying - use of electronic media, especially mobile phones and the internet to intimidate, threaten or upset someone.

Key data from the U.S. based National Center for Education Statistics showed that there were 31 school-associated violent deaths between 2010 and 2011 in the country.

Commenting on possible causes of school bullying, psychologist Burçin Demirkan Baytar from the Child-Family Counseling Center in Istanbul said that the socioeconomic structure of the victims' families were amongst the biggest reasons for carrying out or receiving school bullying.

"Still, high rates exist of verbal and physical violence at homes of those children and teenagers, which make the students behave like their parents," Baytar noted.

School bullying is not the only type of intimidation found in society. It exists also in workplaces, in the military and pressurized social groups in most countries.

In February 2014, shocking official figures revealed a surge in the incidence of bullying in the United Kingdom's armed forces, with one in 10 military personnel claiming to have been the victim of "discrimination, harassment or bullying in a service environment" during 2013.

Last year, Huffingtonpost had stated that more than two thirds of BBC staff had witnessed workplace bullying as senior bosses were seen as "untouchable" due to their position within the corporation according to a report called Respect At Work.

Saying that nonviolence meant avoiding not only external physical violence but also internal violence of spirit, civil rights activist Martin Luther King noted that thereby one not only refused to shoot a man, but refused also to hate him - which is probably as tough for a youngster to receive as any other kind of violence.