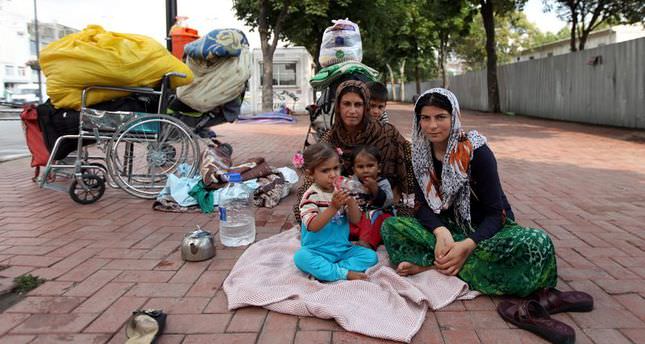 by Jul 21, 2014 12:00 am
Authorities in Istanbul are working on plans to clear the streets of Syrian beggars and house them in camps like those on the border, as Turkey struggles with an influx of over a million refugees and the hospitality of locals starts to wear thin.

Beggars have become increasingly visible in Istanbul, many of them Syrians displaced by their country's three-year war, including women and young children, passports in outstretched hands, tapping on car windows in the city's dense traffic.

They represent a tiny fraction of the Syrians sheltering in Turkey, some housed in well-equipped camps along the border, others living with friends or family or in modest rented accommodation in cities in the southeast, Ankara or Istanbul.

But what feels like a growing number are living in derelict buildings or sleeping in parks, eking out a living by begging - illegal in Istanbul - and raising the concern of locals and other Syrians trying to integrate seamlessly into Turkish life.

"We warned them continuously and told them not to beg. But they're insisting. If they don't give up begging we will take an administrative decision and send them to a camp," the city's governor, Hüseyin Avni Mutlu, told Reuters.

"Istanbul residents have demanded this. We receive complaints," he said, noting that Syrians too were unhappy with a situation that they say gives their countrymen a negative reputation in the eyes of Turks.

Some, Mutlu said, had already volunteered to go to camps, leaving behind the abandoned buildings they had made home, often with no electricity or running water. Others had yet to be convinced and, if necessary, would be taken against their will.

"We always help them if they want to go, we pay their fees, hire vehicles and send them, give them all support they need," Mutlu said, estimating that of 67,000 Syrians in Istanbul only a few hundred were persistently begging.

Turkey has spent billions of dollars sheltering refugees and kept an "open-border" policy throughout the conflict in its southern neighbour. But, like many in the international community, it bet on Syrian President Bashar al-Assad's rapid demise in the early stages of the war, and little anticipated a humanitarian crisis on such a scale.

The government and civil society groups have given many Syrians access to education and healthcare, and turned a blind eye to them gaining informal employment, but there are growing concerns about their long-term integration.

There have been isolated protests in the southeast against refugees accepting lower wages and pushing up prices for accommodation and food.

Those who have found jobs and accommodation in Istanbul, the vast majority, are grateful for Turkish hospitality.

In Fatih, the historic heart of the city, many traditional Anatolian restaurants are staffed by Syrians. In one of them, more than a dozen are without work permits.

"In the Arab countries people used to tell us to go back to Syria. In Istanbul no one bothers us on the street and they are trying to help," said Bilal, who left Damascus more than 18 months ago and first went to Egypt, Jordan and Lebanon.

He said he had been promised a residency permit by the authorities after only a month in Istanbul.

Turkey has built new camps - officially called "temporary protection centres" because it does not consider the Syrians as refugees - in its southern border provinces to meet additional demand, complete in some cases with facilities such as supermarkets, schools, and even a cinema.

Yet as they fill up, Syrians complain of being turned away and many families such as Abdel's prefer the chance to earn money and fend for themselves in its big cities.

A centralised plan to register the urban-dwelling majority of Syrian refugees in Turkey has faltered, meaning officials have little idea exactly who is in the country and what their needs are, leaving them at risk of exploitation and dependent - for now - on the goodwill of their hosts.