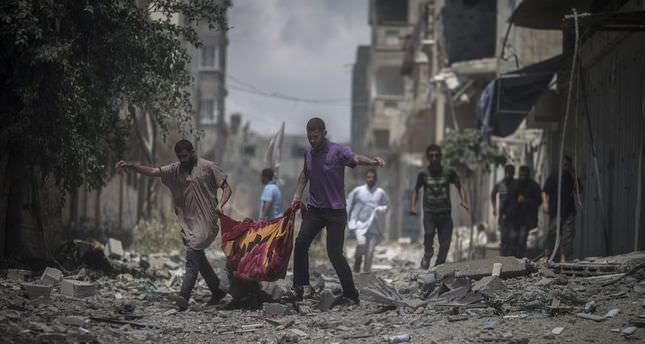 by AA Jul 21, 2014 12:00 am
Some 87 Turkish universities in a joint statement on Sunday condemned Israel's ongoing Gaza offensive since July 7 which resulted in a death toll of 425 so far.

The joint statement, signed by university presidents, announced that "all types of academic, cultural and social relations will cease with Israeli universities which fail to condemn the Israeli massacre, or until the massacre ends and the Gaza blockade by Israel is lifted."

"We will support all initiatives by Israeli universities, Jewish scientists and communities who come out against Israel in support of the oppressed people of Palestine with the aim of ending this massacre," the statement said.

The statement also said aid campaigns for Gaza will be started in universities, as well as efforts to raise awareness of the violence on international platforms.

Since July 7, Israel has been pounding the Gaza Strip, home to some 1.8 million Palestinians, with crippling air and naval bombardments with the ostensible aim of halting rocket fire.

Also, all legal procedures will be followed to ensure Israel pays compensation to the casualties it caused in Gaza and to bring Israeli officials to account so they can be sentenced for their part in the massacre.

"United Nations Security Council, tasked with protecting the international order, although they have failed many times, is expected to agree on and apply a resolution listing sanctions for Israel," the statement also said.

"It is not comprehensible why the UN have not given Israel UN sanctions before considering Israel has never abided by UN resolutions."