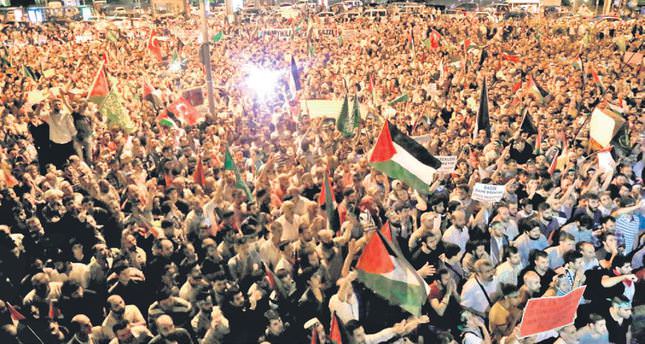 Mass protests against Israel, whose Gaza military operation has killed over 400 Palestinians, continued in Istanbul for a third day on Saturday, with the Israeli consulate being surrounded by angry crowds. More protests were expected late yesterday

The deaths of more than 400 Palestinians in the military operation conducted by the Israeli military against the Gaza Strip has created intense anger in Turkey, with dozens of demonstrations across the country around the clock condemning the indiscriminate killings by Israel.

Nationwide protests against Israel over its indiscriminate killing of civilians, including children, have seen hundreds of protesters voice their anger over the past week. Istanbul, where the Israeli consulate is located, was rocked by mass rallies outside the Israeli mission for three days.

During the protests, organized by nongovernmental organizations, some protesters attempted to storm the building despite police intervention. On Saturday, thousands of people gathered outside the consulate and tried to storm it again by climbing up the outer walls of the plaza that houses the consulate. Again, riot police responded with tear gas and water cannons. Some demonstrators threw stones and firecrackers at the building.

The Humanitarian Aid Foundation (IHH) organized the rally against Israel's Gaza offensive outside the consulate in Istanbul's Levent district in cooperation with the Association of Free Thought and Education Rights (Özgür-Der) and the Confederation of Public Servants Trade Unions (Memur-Sen). IHH was the chief organizer of the Gaza aid flotilla in 2010. The flotilla's Mavi Marmara vessel carried activists with humanitarian aid who tried to break the Israeli blockade of Gaza, but was raided by Israeli troops on May 31, 2010 leading to the deaths of nine Turkish nationals.

Following iftar, the evening meal for breaking the fast during Ramadan, protesters, whose numbers reached about 5,000 within hours, flocked to the consulate from many districts of Istanbul. Some streets were closed to traffic due to the high number of protesters.

A stage was set up on top of a bus outside the consulate overlooking the crowd who were waving Palestinian flags, banners and placards with anti-Israeli slogans. Demonstrators shouted "Allahu Akbar" (God is great), a staple of protests by Muslims everywhere, and denounced Israel.

Addressing the crowd, Özgür-Der President Rıdvan Kaya, said "We Muslims cannot remain silent against oppression in any part of the world. Muslims are being killed in Gaza by warplanes. Let us curse those oppressing Muslims and let us pray for our Muslim brothers and sisters together." "This is the army of [the Prophet] Muhammad and it instills fear on those oppressors. Therefore, we should continue our struggle through protests and rallies," he added.

Bülent Yıldırım, chairman of IHH, said they planned larger rallies in 81 provinces of Turkey to voice their condemnation of Israel's cruelty. "By God's will, we will respond to the Zionists soon. Every day, hundreds of Muslims are massacred but we witness people standing up against these acts of terrorism from every corner of the world. Our Muslim brothers and sisters in Europe and the U.S. fill the squares to protest Israel's cruelty. Yet, Israel continues killing hundreds of Muslims including children and women. Oh Israel and [Prime Minister] Netanyahu! Witness the enthusiasm of people gathered here to go to Gaza. We Muslims may show up in Tel Aviv and Jerusalem one day unannounced and we will erect the flag of Islam everywhere," he said. A petition was held on the sidelines of protests with demonstrators signing up to be "human shields" in Gaza.

In the late hours of Saturday, some demonstrators started throwing bottles and stones at the consulate and a group jumped over the walls surrounding the building.

They ran toward a statue in the garden of the plaza and hung Turkish and Palestinian flags before they were chased away by riot police.
Riot police also fended off other protesters attempting to enter the garden by firing water cannons.

Meanwhile in Ankara, a single protester approached the Israeli embassy carrying a black bag. As the police attempted to apprehend the suspicious man, he threw the bag toward the embassy's courtyard but the bag got stuck on a tree. The police found the bag was full of garbage and the suspect was detained.

In Adana, where a U.S. consulate and military base are located, a group of protesters carrying Palestinian and Turkish flags staged an anti-Israel rally outside the U.S. consulate, a major ally of Israel, late on Saturday. Demonstrators prayed for Palestinians and camped outside the building until the early hours of Sunday when they had breakfast for sahoor (the pre-dawn meal during Ramadan).

As some protesters started reciting verses from the Quran, a splinter group ran toward the building and broke through police barricades. They threw stones at the consulate before they were dispersed by riot police. Protesters left the premises after performing morning prayers.
Last Update: Jul 21, 2014 11:37 am
RELATED TOPICS