Number of Turkish soldiers killed in clash rises to three 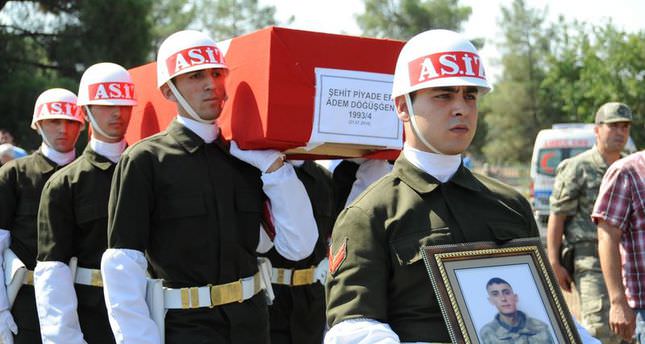 by Jul 22, 2014 12:00 am
Nine people were killed in clashes between the Turkish military and Kurdish rebels on the country's Syrian border, the army said on Tuesday, apparently the most serious outbreak of violence since the militants declared a ceasefire last year.

A local official earlier pointed the finger at smugglers, after an armed group crossing the border from Syria into Turkey ignored calls to stop and opened fire on an army outpost.

Three border guards were heavily wounded, after they came under attack from around 15 people trying to cross into Turkey, the Turkish General Staff said in a statement. two of whom died on the same day clash has accured but other Turkish soldier have died day after clash acuured,

Soldiers, Adem Döğüşgen and Berat Sarıkaya died after the attack and other wounded soldier Yiğit Şahan has died on Tuesday despite all the medical efforts.

Reinforcements were deployed and at least six "terrorists" from the outlawed Kurdistan Workers Party (PKK) or its affiliate, the Syria-based Democratic Union Party (PYD), were believed to have died in the clash, the army said.

There was no immediate word from either the PKK or PYD.

Earlier this month Turkish deputies passed a bill giving legal recognition to negotiations for the first time, a move hailed as an important step on the path to peace.

Erdoğan is hoping to become Turkey's first directly elected president in polls due on August 10, and may need to rely on votes from parts of the Kurdish community to help him win.

The ceasefire - negotiated with the PKK's imprisoned leader Abdullah Öcalan - has largely held since it came into force last March.