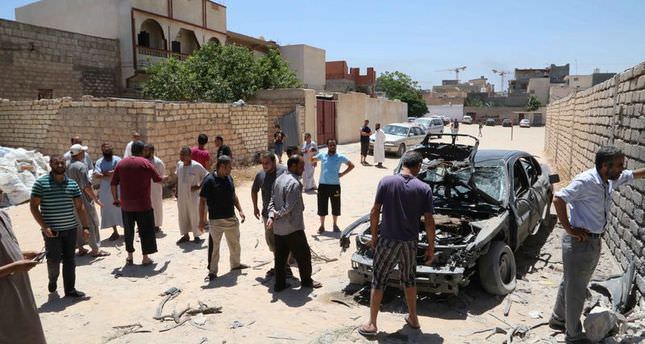 by AA Jul 24, 2014 12:00 am
Turkey's foreign ministry on Thursday warned Turkish citizens to leave Libya and to avoid travel to the country as the security situation has deteriorated in the country and remains unpredictable.

Benghazi has been the scene of mounting crime and militancy since the 2011 ouster and death of Muammar Gaddafi, the former Libyan leader.

Turkish Foreign Minister Ahmet Davutoğlu also expressed concern over the deterioration of the security situation in Libya and said: " The Turkish embassy in Tripoli is likely to be evacuated."

Davutoğlu also said in a televised interview on Thursday that he discussed the evacuation of Turkish citizens in Libya with Turkish Prime Minister Recep Tayyip Erdoğan and added that Turkey had taken measures for the evacuation.

The city has also witnessed sporadic fighting between forces loyal to renegade general Khalifa Haftar and militias, the latter of which have become a common feature of post-Gaddafi Libya.

In May, Haftar declared war on armed militias based in eastern Libya, vowing to "purge" the country of "extremists."

The Libyan government, for its part, has called the former general's campaign a "coup."

After serving as army chief-of-staff under Gaddafi, Haftar spent nearly two decades in the United States in exile before returning to Libya in 2011 to join the uprising against the long-serving autocrat.