A sad Eid for Kurdish families awaiting return of their children 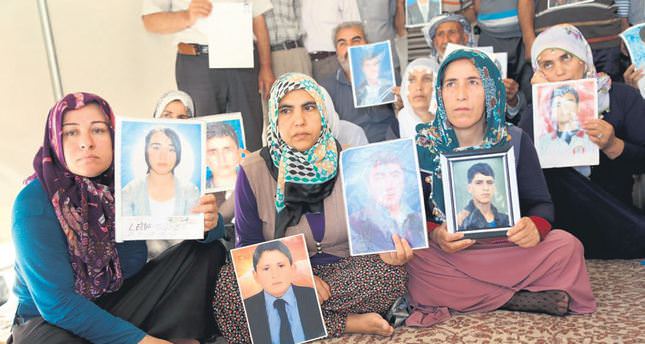 As Turkey prepares to welcome Eid al- Fitr, a religious festival that brings together separated family members living in different cities, parents of those recruited by the terrorist organization PKK are looking forward to a reunion

Families have been staging a sit-in protest in the southeastern province of Diyarbakır since May, calling on the PKK to return their children who have been "brainwashed" by the organization and urging authorities to bring about their return.

Defying scorching temperatures, the families clutch photos of their sons and daughters, some as young as 15 and desperately await for their return.
For some families, this will be the first eid they will observe without their children and for others the first Eid where they will join the sit-in originally started by three mothers after returning from distant cities.

Celal Yıldız is the father of Serkan, 18, who was "abducted" by the PKK in the eastern province of Erzurum. He traveled to Diyarbakır with his wife
Remziye for the protest after his son went missing in June.

Serkan had taken a university entrance exam and wanted to study medicine, his father said. The young student was staying in a dormitory in central Erzurum while preparing for the exam and was reportedly attending meetings for PKK supporters. His family believe his son was persuaded to join the PKK militants. Pledging to continue the protest until his son returns, Yıldız said the only gift he wanted for eid, which will begin on Monday, was his son. "We will be here during eid as well and will not leave until they return home. I hope they return by eid and then it will be a joyful celebration for us," he said.

Leman Aydın, mother of 16-year-old Vedat, says it will be her first Eid without her son. "If only he came back and kissed my hand," the teary-eyed mother said, referring to an eid tradition. Vedat was a high school student living in the eastern province of Bitlis when he joined the PKK in April. His family staged a protest in Bitlis first and joined others in Diyarbakır when the sit-in started.

Sabri Önal joined the protest, which is now in its 67th day, for his grandson Muhammed Emin. Emin was in his third year at Marmara University in Istanbul when he was recruited by the terrorist organization. "We await good news. May God reunite us with those children," he said.

Gülsen Ölmez traveled from Ardahan in northeastern Turkey to Diyarbakır for the protest. Her son Burak was "abducted" four months ago by the PKK. "I beg them to hand him back. I'll wait for my son here and will not return home until he comes," she said. "My mother died without seeing her grandson return. Her health worsened after he'd gone. This eid is not a festival for me because I lost both my son and mother," Ölmez said.

Not every family was tearful in Diyarbakır, though. The Şentürk family, who have been among protesters at Diyarbakır's Dağkapı Square, have been reunited with their son Ramazan, 25. Ramazan Şentürk and 11 others had surrendered to the security forces on Wednesday in the southeastern Turkish province of Şırnak. The family had been participating in the protests for 40 days and they visited other families after the reunion with their son. Hugging other mothers, Zübeyde Şentürk said her bliss was "undescribable" and hoped that others would be reunited with their children soon.

Ramazan Şentürk was a university student in the northern city of Sinop and traveled to Muş in eastern Turkey to join the PKK around six months ago. "I am very, very happy and I hope our friends protesting here can share our joy when their children come back. I thank everyone contributing to the solution process, especially Prime Minister Recep Tayyip Erdoğan," his father Cumali Şentürk said. He was referring to the reconciliation process initiated by the government to bring peace in the region after years of conflict incited by the PKK. Throughout the process, Turkey plans to address the plight of the neglected Kurdish community and end the acts of terrorism by the PKK which exploits young children of Kurdish descent.
RELATED TOPICS