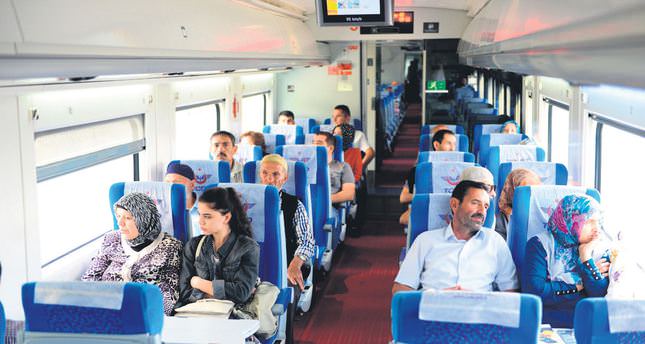 As the high-speed train between Istanbul and Ankara starts with the first week free of charge, hundreds line up to travel between Turkey's two largest cities in record time

Turkey's long-awaited TL 8.6 billion high-speed train link between Istanbul and the Turkish capital Ankara began operating on Sunday from Istanbul's Pendik station. The high-speed service, which reduces the travel time between Istanbul and Ankara to three-and-a-half hours, will be free of charge for the first week of operation.

Train driver Özdemir Sirmagül told Anadolu Agency on Sunday the 409-passenger capacity train was full due to intense interest and the fact that most Turkish citizens were on holiday for the feast to mark the end of Ramadan. Twelve trains will run in the first week, Sirmagul added. One of the first passengers, Gülsüm Demirtaş, said she had acquired five tickets for her family and they were going to visit Ankara for the Eid holiday.

Another passenger traveling in business class, Sukran Kinik, thanked those involved in the rail project. Tickets for the Ankara-Istanbul service are priced at TL 70, while children under seven years of age are free of charge. Children between the ages of 7 and 12 pay TL 35. Discounted tickets are also available for students (TL 55) and senior citizens (TL 35).

The line was inaugurated by Turkey's Prime Minister Recep Tayyip Erdogan last Friday. The high-speed service was first introduced in 2009 between the capital Ankara and Eskisehir to the west. The latest line links Eskisehir to Istanbul, joining Turkey's political and financial capitals. The original track has proved immensely popular with Turkish passengers, carrying 15 million people since its launch, Turkish State Railways said.

An estimated 7.5 million passengers are expected to use the new line. The new addition to the country's high-speed network means 1,420 kilometers of track can now carry the faster trains. There are plans to grow the network to 3,500 kilometers by the centenary of the Turkish Republic in 2023. A link between Ankara and the Aegean city of İzmir - Turkey's third largest - is high on the agenda as the network expands to 25,000 kilometers of track. Eventually, 17 cities will be connected by high-speed lines, servicing more than half the country's 77 million people. Turkish State Railways announced in January that it would invest almost half of its 2014 budget - TL 1.8 billion - in high-speed train projects.
RELATED TOPICS