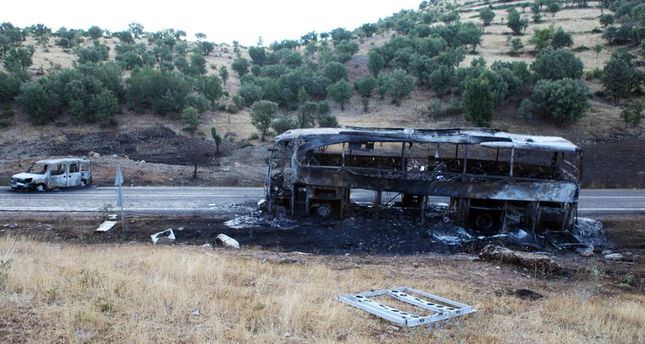 by Jul 31, 2014 12:00 am
Twenty-six people died as a result of a horrific tanker truck explosion in southeast Turkey last week, with the toll rising drastically after more victims passed away at hospitals across the country, media reported Thursday.

A tanker carrying liquefied petroleum gas (LPG) overturned and exploded on a highway near Diyarbakır on July 22, killing one person on the spot.

However the death toll has now risen sharply to at least 26, even though there were almost no additional reports or statements about the disaster until now, NTV television reported.

A total of 70 people, including women and children, were injured when the huge blast set on fire two passenger cars and several other vehicles that were also travelling on the road at the time.

Six more victims died on Thursday at hospitals in the cities of Istanbul, Izmir and Adana where they were being treated for body and facial burns, NTV television reported.

The toll could rise even further since there are still more than 40 patients currently receiving treatment and some of them are in critical condition, it added.

It was not immediately clear why the scale of the disaster is only being made public now. For the last days, Turkey has been celebrating a public holiday marking the end of the holy fasting month of Ramadan.

The accident also highlighted the inefficiency of public hospitals in Turkey's impoverished Kurdish-majority southeast, with most patients flown to burn care facilities in the west of the country for treatment.