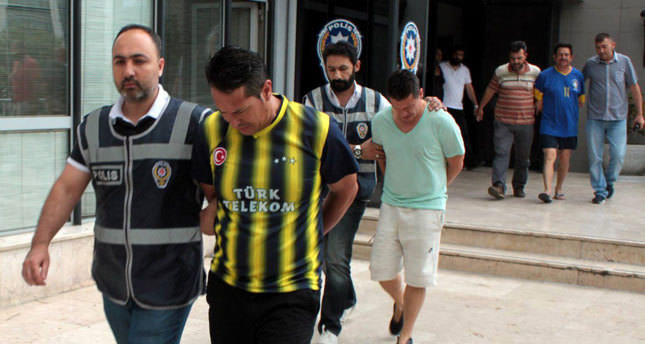 by Daily Sabah Jul 31, 2014 12:00 am
Georgian and Russian criminals in Turkey are mainly involved in robbery and murders while those from Guatemala, the Philippines theft and those from Africa counterfeit money, according to new statistics released by the Police Department.

Crimes perpetrated by foreigners are on the rise according to figures compiled from Turkish National Police statistics by Turkish daily Habertürk.
The country's most populated city Istanbul, in particular, attracts criminals while other big cities such as the capital Ankara, Antalya, İzmir, Kocaeli, Bursa and Sakarya have also become a hotbed for criminal activities. Though no concrete figures have been declared on the number of foreign criminals, the types of crimes they are involved in is listed by the police, according to the news report.

Most thefts committed by foreign criminals are those perpetrated by Guatemala, Philippines, Colombia, Venezuela and Dominican Republic nationals. Armed robbery and murders are mostly committed by Georgian and Russian nationals. One of the most notorious cases was last year when a gang of four Georgians were captured after they committed seven robberies from October 2013 to January 2014. Criminals used to rear-end the car of their victim they followed beforehand while withdrawing money from banks or shopping at jewelry stores and steal the cash in the car during an ensuing altercation they started after the crash.

Iranian criminals have been known for scams involving sleight of hand. Known as "tırnakçılık" in Turkish, they steal money under the guise of asking for more change after their purchase by confusing the seller. Criminals from African countries including Guinea, Nigeria, Ghana, Ivory Coast, Cameroon and Liberia are involved in counterfeit money trade, according to the statistics.

Criminals from Russia, Ukraine and Moldova have been involved in prostitution. Women from those countries often fall victim to their fellow countrymen and are forced into prostitution in Turkey. Crimes involving kidnapping and ransom are mostly carried out by Pakistani nationals in Turkey, according to the figures.

In February, eight Pakistani nationals were arrested on charges of kidnapping Bangladeshis and fellow Pakistanis for ransom. Panhandling, a felony punishable with fines in Turkey, is popular among Syrians. Impoverished Syrians without job prospects, who either have to stay in already crowded camps or squat in abandoned buildings and parks, turn to begging to make a living.