Riots over Syrians a mix of provocation and social crisis 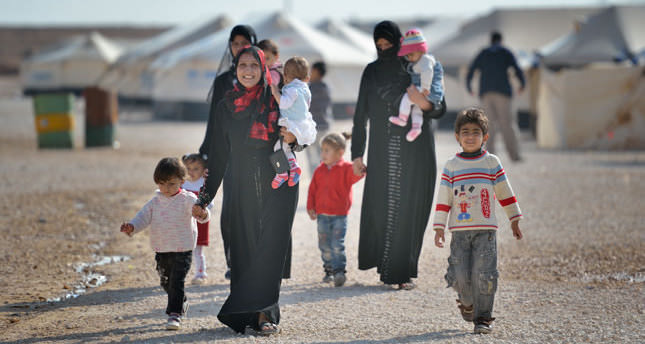 by Daily Sabah Aug 01, 2014 12:00 am
With more than a million Syrian refugees in Turkey and little help from the international community for their upkeep, there is serious unrest in several cities where Syrians are becoming a strain on communities.

Syrians, whose number in Turkey surpasses 1 million people, faced the anger of locals provoked by social media rumors in the central Turkish province of Kayseri in yet another incidence of unrest as Turkey remains embattled due to the influx of citizens from its conflict-ridden neighbor.

Rumors of the beating of a local by Syrians fuelled the riot in Melikgazi, a district of Kayseri, on Wednesday evening. About 400 people armed with sticks attempted to march to a Syrian-majority neighborhood. Chanting anti-Syrian slogans, the group confronted riot police who ordered them to disperse. When they refused, the police fired tear gas into the crowd. The angry group vandalized a car with Syrian license plates during the incidents. Local authorities managed to convince the crowd to disperse while the police department dispatched reinforcements to the area. Six people among the crowd who refused to leave the area were detained by the police. Police officers patrolled the streets and warned residents not to rally in messages issued through loudspeakers.

Kayseri Governor Orhan Düzgün released a written statement about the incidents and quashed rumors that locals were injured in a brawl between Turks and Syrians. Düzgün said that about 50 people armed with stones and sticks engaged in a quarrel with Syrians in a park on Tuesday night and three Syrians were slightly injured. He said the group was dispersed and a criminal investigation was launched. The governor stated more people convened on Wednesday to protest Syrians. "They staged a march and attempted to harm Syrian nationals. They threw stones on five cars belonging to Syrians. Deputy governor and police chief negotiated with the group and persuaded them to end the riot. Rumors on social media claiming our citizens were injured are not true. We are currently conducting an investigation into the matter," he said.

The attempt to attack Syrians came a week after a similar incident in the southeastern Turkish province of Mardin. A group of locals protesting the presence of Syrians after they engaged in a brawl with locals had tried to lynch a number of Syrians but the police rescued Syrians.

Turkey, an example in the world for its care of Syrians taking shelter in the country, is struggling to help the ever-increasing influx of the displaced. The total number of Syrians in Turkey has already reached 1.05 million according to the latest figures. Over 218,000 people stay in 22 camps and container cities while the remainder are staying elsewhere across the country.

Impoverished Syrians turn to panhandling or provide cheap labor illegally, much to the chagrin of the unemployed Turks who are at the forefront in protests witnessed against Syrians, especially in the southern provinces bordering with Syria where a large number of Syrians reside, or rather squat.
Last Update: Aug 01, 2014 1:03 am
RELATED TOPICS