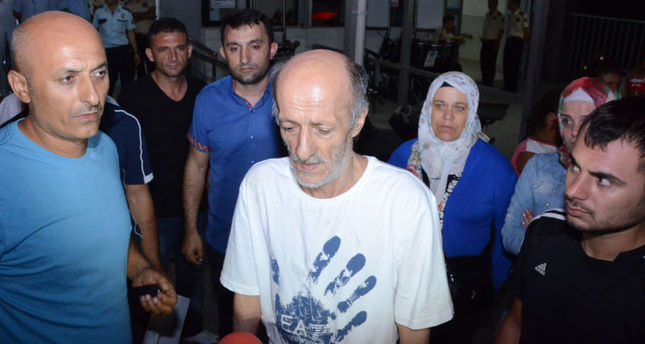 by Daily Sabah Aug 01, 2014 12:00 am
A 16-year-old boy was killed when he was caught in a crossfire late Thursday during an armed clash in Istanbul between supporters of two terrorist organizations.

İbrahim Öksüz, a textile worker, was walking home from work on Thursday night in the Gazi neighborhood of Istanbul's Sultangazi district when he found himself in the middle of clashes between members of the Patriotic Revolutionary Youth Movement (YDG-H) and the Popular Front. He was injured when a bullet fired by an unknown perpetrator hit him in the heart. The young man died, while he was being ferried to the hospital.
Öksüz became the first victim of this week's sporadic clashes between the two groups in Istanbul's Kağıthane and Sultangazi districts. YDG-H and Popular Front members had confronted each other after the Popular Front trashed a stand opened for presidential candidate Selahattin Demirtaş's campaign earlier this week. The YDG-H is the youth wing of the terrorist Kurdistan Workers' Party (PKK), which is known for its links to the Peoples' Democratic Party (HDP), which nominated Demirtaş for the presidency. The Popular Front is a wing of the Revolutionary People's Liberation Party-Front (DHKP-C), which has long been at odds with the PKK.

It is not known who fired the shot that killed Öksüz, but both groups accuse each other of responsibility for the clashes, while they abstained from directly blaming each other for the murder of Öksüz. The HDP released a written statement about the incident and said tensions elevated after the Popular Front attacked Demirtaş's campaign stand and "culminated in a concerning development," referring to the death of Öksüz. "The party strived for ending the tensions through statements and negotiations and called on everyone to calm down. We had believed it was over following our negotiations (with the Popular Front), but obviously a plot by dark forces claiming they are revolutionaries succeeded and cost the life of a youth, at a time our candidate Demirtaş has reached out to the Alevi community and impoverished slums. This is a violent provocation and an attempt to terminate our election campaign, which is our most natural democratic right. We call on the Popular Front once again to give up its violent stance and stop provoking tensions," the statement said. The HDP called for a comprehensive investigation to find out the perpetrators of the attack.

Both the Popular Front and the YDG-H find support in Istanbul's working-class neighborhoods. While most Popular Front members are from the Alevi community, YDG-H supporters are predominantly Kurds.

However, the Turkish National Police disputed this claim and said three people were injured in the clashes. The police also said an investigation had been launched to find the perpetrators.

The Popular Front is also known as an armed group. Suspected members of the Front killed Burak Can Karamanoğlu, a 22-year-old man, during riots in Istanbul's Okmeydanı district on March 12. The group boasted of its firepower by releasing photos of its masked members roaming Istanbul streets while wielding shotguns and pistols.