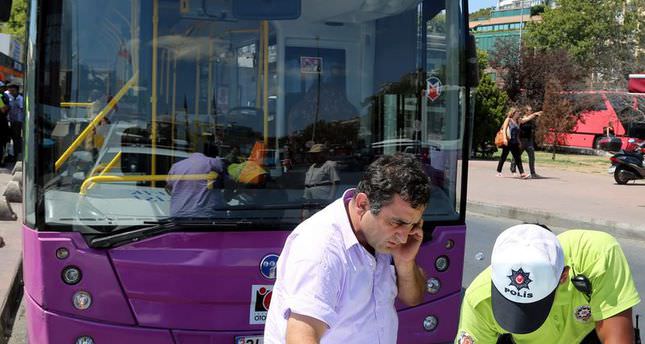 Following five accidents involving public buses in Istanbul in two weeks, concerned authorities stepped up measures for tighter inspections of the vehicles and their drivers in the city where the bus is one of the most used means of transportation

On July 27, a private-run public bus caught fire in Kavacık, on the Asian side of the city. Four passengers burned to death in the accident when the bus caught on fire on the road for an unknown reason. Two days later, another private-run public bus crashed into a wall to avoid crashing into a car, injuring 11 passengers. The next accident happened on July 31, in the city's Beşiktaş district when another bus carrying 30 passengers crashed into a wall when its brakes failed. Passengers escaped with slight injuries. This was followed by another bus accident on Aug. 1 in Kabataş, a district near Beşiktaş. A bus, again reportedly with brake failure, crashed into a ferry dock, injuring 16 people. Only one day later, another bus crashed into the garden of a restaurant while the driver was trying to evade crashing into a taxi, but there were no casualties.

In the wake of these accidents, officials from the municipality's Istanbul Transport Authority (İETT) held a meeting with representatives of private bus companies to discuss the measures to prevent further accidents. Under new measures that will begin to be implemented today, about 4,000 public bus drivers working in the city will undergo training for an update of certificates issued to drivers to qualify for operating buses. They will be taught safe driving methods and undergo mental tests to determine their psychomotor skills required for safe driving.

Inspection of drivers' compliance with speed limits through a GPS system already in place will be increased.

Any driver "under risk from their mental state" will not be allowed to get behind the wheel. Inspection of vehicles – done once a year – will be done multiple times throughout the year without any schedule.

Buses operated by İETT are regarded as "safer" since they are regularly inspected and companies selling buses to the municipality provide maintenance service in the bus depots of the municipality. Both private and municipality-run buses are subject to general inspection every January by İETT and daily limited inspection every morning in 17 locations across the city. Some of the city's old public buses were replaced with newer ones in the recent years.

All public bus drivers are required to have a minimum of three years experience in driving buses. After they are employed, they undergo training at İETT's academy for drivers.

Most accidents are attributed to the driver's fault or the fault of other drivers who cause bus drivers to lose control of the vehicle while overtaking them. The accident in Kabataş should be blamed on the driver according to experts who said that the driver failed to push a button that makes the vehicle come to a full halt after pressing the brake.