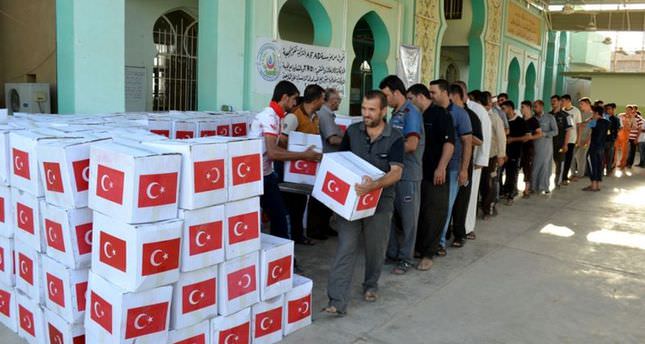 by Daily Sabah Aug 03, 2014 12:00 am
The Turkish Prime Ministry released a report outlining Turkey's humanitarian aid to Gaza and Iraq that amounted to over $8 million.

The country's state-run aid agencies and nongovernmental organizations (NGOs) are spearheading efforts to help victims of Israel's constant bombings in the Gaza Strip and people displaced by the Islamic State of Iraq and al-Sham (ISIS) offensive in Iraq.

In a written statement, the Prime Ministry's Office of Public Diplomacy said Turkey conducted aid campaigns to Gaza through its embassies, Turkish Cooperation and Development Agency (TİKA), Red Crescent and several NGOs under the coordination of Turkey's Disaster and Emergency Management Presidency (AFAD). In addition, the country's top religious authority, the Presidency of Religious Affairs, launched an aid campaign for Gaza.

The aid to Gaza has amounted to $8.05 million (TL 17.2 million). The aid included over 17,000 food packages, 15,000 hot meals, 20 tons of medicine and medical equipment and 14 generators where the infrastructure has been largely destroyed by Israel's attacks. Turkey also held talks with international organizations including the U.N. Relief and Works Agency for Palestine Refugees in the Near East (UNRWA) are operating in Gaza for aid cooperation.

The statement said $1.5 million was handed to Palestinian authorities by AFAD for medicine for those injured in the attacks while the Red Crescent distributed food packages and transferred cash to its Palestinian counterpart for food aid. The Red Crescent also supplied medicine and medical equipment to Gaza that arrived on July 27.

TİKA, the state-run aid agency known for its international humanitarian efforts, also distributed food and regular hot meals to 15,000 Palestinians in the past month. It also delivered generators for areas where the power infrastructure was devastated by shelling. TİKA also coordinated the transfer of wounded Palestinians to Turkey for treatment, where a total of 41 people from Gaza are being treated. Over 1,760 Palestinians were killed and 9,320 people were wounded in 28 days of attacks by Israel according to Palestinian sources while Israel announced 64 soldiers were killed in attacks by Hamas. Most of the casualties have been civilians, including women and children. The attacks also left about 200,000 Palestinians homeless as bombings have completely destroyed their homes. Gaza also faces "a rapidly unfolding health disaster of widespread proportions" according to the U.N., which warned that the medical facilities in Gaza are suffering heavily from Israel's constant attacks.

Criticized for turning a blind eye to the plight of Iraqis, the government also revealed the aid provided to that country where ISIS launched a brutal offensive in June. Following the takeover of Mosul by ISIS militants, many Iraqis, including Turkmens concentrated in Northern Iraq, were forced to leave their homes. One day after the capture of Mosul, Turkey bought food locally in Dohuk and Zakho in Northern Iraq, near Mosul and 2,000 food packages were distributed in Dohuk on June 12, the prime ministry's statement said. Also, 92 trucks containing aid materials from TİKA, the Red Crescent, Turkish municipalities and NGOs were sent to Iraq while a humanitarian aid coordination center is being established in the southeastern Turkish city of Şırnak on the Iraqi border on July 7. Aid materials include food packages for 41,000 people, tents for 12,500 people, blankets, kitchen equipment and beds provided by AFAD while the Ministry of Health dispatched over 441,000 boxes of medicine. The Red Crescent also sent food, tents, clothes and other basic humanitarian needs to Iraq. Humanitarian aid was sent to towns in Northern Iraq controlled by the Kurdistan Regional Government (KRG) where the displaced take shelter.