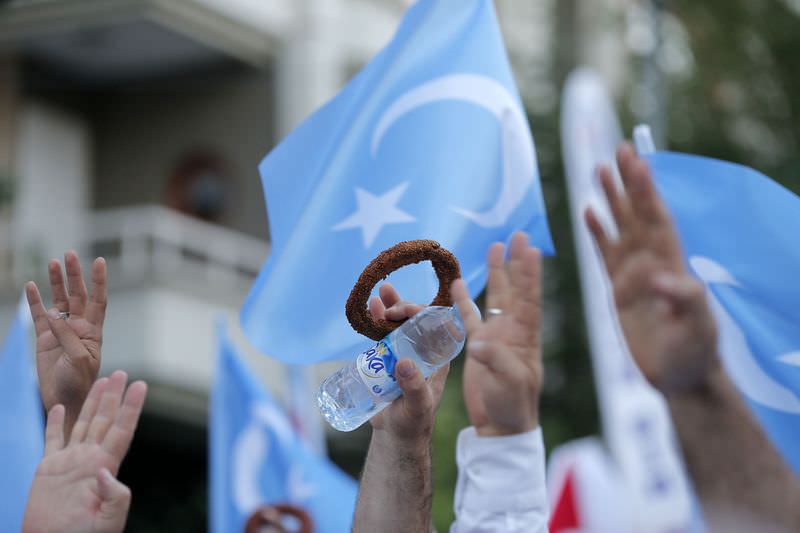 by Daily Sabah Aug 03, 2014 12:00 am
A group of activists from various Turkish nongovernmental organizations staged a protest outside the Chinese embassy in the Turkish capital of Ankara yesterday to protest China's "massacre" of Uighurs in the Xinjiang Uighur Autonomous Region.

Calling themselves Ankara Platform of Faith Freedom, activists chanted, "Killer China, get out of East Turkestan," the name for the region commonly used by Uighurs for their land.

Soner Kartal, a protester speaking on behalf of the group, said as Muslims, they condemned "Red" China's oppression of "our brothers in East Turkestan."

"We want our government, international human rights organizations, the United Nations and top international bodies of Muslim countries to take necessary steps to end this oppression as soon as possible," Kartal said.

He said that China is conducting "a genocide" and killed at least 3,000 Uighurs recently. He also called for a boycott of Chinese goods.

Mustafa Sinan, another activist, said simply condemning China was not helpful and both the government and opposition should adopt a common stance against China.

China has belatedly announced that 59 "terrorists" were killed by security forces in Shache last week and 37 civilians were killed in attacks by masked militants who launched knife attacks in two towns on July 28. However, Uighur human rights activists claim most of the casualties were those killed by Chinese police opening fire on protesters denouncing China's pressure on Uighurs not to fast during Muslim holy month of Ramadan.

Xinjiang, home to a large Muslim Uighur population, has been plagued with violence for years. Hundreds were killed in the province in the past year. Uighurs blame the government's repressive policies for unrest in the region while China accuses Uighurs of "separatist" activities. Ilham Tohti, a moderate academic and human rights activist advocating for Uighur rights, was indicted last week on separatism charges.