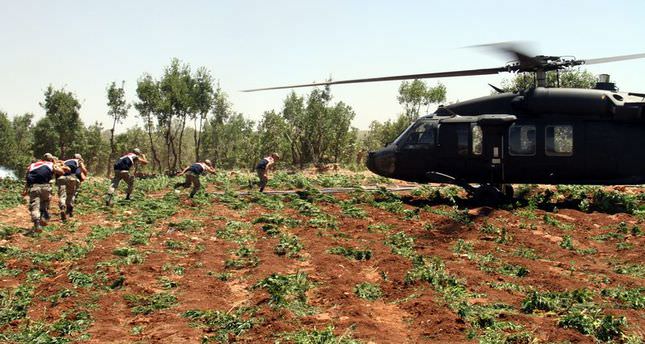 by Daily Sabah Aug 04, 2014 12:00 am
Turkish gendarmerie troops confiscated 210,000 cannabis plants, which could be used to produce 10 tons of processed hashish and 520 kilos of processed hashish, in the southeastern Turkish province of Diyarbakır on Aug. 2, according to a statement released yesterday.

The Diyarbakır Governorate said in a statement that gendarmerie troops accompanied with commando units stormed various rural locations in the province's Hazro district and detained seven suspects on charges of cultivating cannabis and possession of hashish. The confiscated drugs were destroyed.

The province has long been at the center of local drug production in Turkey. The terrorist organization PKK is accused of controlling the drug production and trade in the region. In July 2013, security forces had destroyed around 2 million cannabis plants in the province's Lice district in a major counter-narcotics operation. According to the intelligence reports detailing drug trade indicate that Lice is the terrorist organization's main base for the cultivation of cannabis used in drug production, a main source of income for the group. Counter-narcotics operations and tightened security measures led to a decline in profits from the drug trade in the first five months of 2014. In 2013, over 76 tons of hashish and 49 million cannabis plants were seized in Diyarbakır and its vicinity.