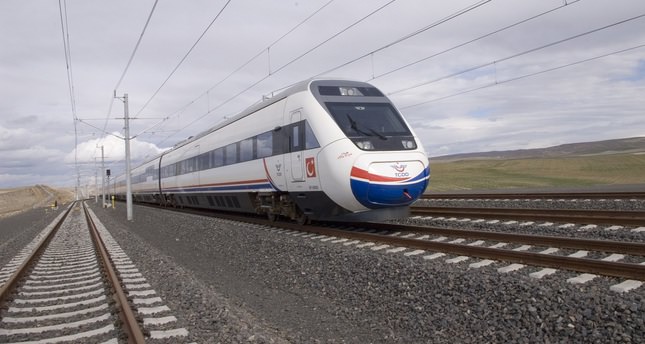 by Daily Sabah Aug 06, 2014 12:00 am
A breakdown of Turkey's recently inaugurated high-speed train on Aug. 2 gave way to criticism that the train project was the result of hastened work, and authorities failed to address the train line's technical issues. Turkish State Railways (TCDD) released a statement in a sharp rebuke to media reports that the train was towed by "an old train" after the breakdown in the northwestern city of İzmit.

A photo showing an apparently oldfashioned train towing away its modern counterpart has splashed the front pages of Turkish dailies disparaging the government's ambitious project to connect the country with a vast railway network. The TCDD statement said the old train was actually a locomotive running on diesel, and was part of a measure against brief power outages on the railway. The statement said the towing of high-speed trains by towing trains not working on electricity was common in the world.

A severe storm and accompanying lightning had knocked out the power to the high-speed train traveling from Istanbul to the capital, Ankara. The train was towed for eight kilometers to a train station. "Portraying measures in the face of a power outage as a failure of the highspeed train, and describing the diesel locomotives as 'old trains' and branding the incident as 'Old Turkey tows New Turkey' (in a reference to government's slogan to describe its mega projects) stem from media's lack of information on the matter," the statement said.

Turkey's high-speed train was beleaguered with a series of mishaps since its inception, and before its inauguration in July. Its launch was delayed for months due to a string of sabotage attempts and cable thefts, and it broke down briefly during Prime Minister Recep Tayyip Erdoğan's inaugural ride on July 25.

The Ankara-Istanbul high-speed rail line is part of the government's plan for a major overhaul of the country's crumbling railroad infrastructure. High-speed train services are expected to cover more cities by 2023 according to the government's plans.
Last Update: Aug 06, 2014 9:14 am
RELATED TOPICS