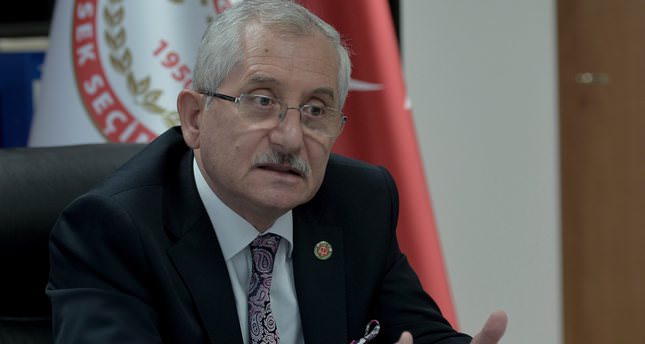 by Daily Sabah Aug 07, 2014 12:00 am
Supreme Election Board (YSK) President Sadi Güven rejected election fraud accusations after opposition parties' joint candidate Ekmeleddin İhsanoğlu's misleading claim that an additional 18 million voting ballots were printed for the Aug. 10 presidential election.
With the opposition doubtful about the transparency of the upcoming presidential election, YSK head Güven refuted the allegations and stated that the election process is crystal clear. In his statement to the Anadolu Agency, Güven responded to the accusations with these words, "There is no unchecked voting ballot around Turkey," adding, "It is crystal clear where these ballot slips are going to be distributed, which is strictly controlled by the YSK." Güven emphasized that the YSK is obliged to print at least 15 percent of additional ballot slips according to Turkish Electoral Law. Güven also shared technical details with the press, including the exact number of total eligible voters and the distribution process for additional voting ballots to ballot boxes.
A few days ago, the opposition parties' joint candidate İhsanoğlu questioned the fairness of the upcoming election, which will be held on Aug. 10. "Of course, some of the slips could be destroyed due to rain or floods. But what does an additional 18 million slips mean? Under whose command will these 18 million slips be used? How will they be used? How will they not go to the wrong places?" he asked the press during his presidential election campaign meeting in Eskisehir on Aug. 4. Opposition parties and pro-opposition media made the same accusation before the March 30 local elections in Turkey. Again, the YSK responded to charges coming from the opposition at that time and denied them.
Prime Ministers Recep Tayyip Erdoğan discussed and criticized opposition candidate İhsanoğlu by claiming that he is uninformed about the Turkish electoral system. On a TV program Erdoğan noted, "If one doesn't understand politics, of course he puts forward ridiculous claims such as who is going to coordinate these ballots, how and where are these ballots going to be distributed? There are around 53 million eligible voters, and the YSK is obliged to print at least 15 percent more ballots than there are eligible voters." AK Party presidential candidate Erdoğan also pointed to opposition parties' accusation during the March 30 local elections and gave specific numbers about additional ballot papers in those elections to refute continuous misleading accusations.
Last Update: Aug 07, 2014 1:55 pm
RELATED TOPICS