Istanbul reaches to the sky to ease cumbersome traffic 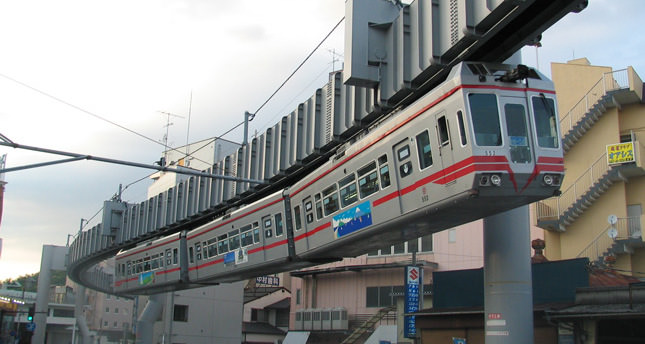 by Daily Sabah Aug 07, 2014 12:00 am
A monorail is the Istanbul municipality's latest bid to relieve the city's heavily congested traffic and will be introduced for the first time in the country.
Tentatively called Havaray (air rail), the monorail project will carry 200,000 passengers every day in a city of over 14 million. A tender will be launched in September for a preliminary survey of the land and infrastructure for the project.

According to the municipality's plans, 10 monorail lines will be installed across the city over time, while the monorail will operate on four lines on the Asian side and four on the European side of the city in its initial stages. The length of monorail lines will be 47.8 kilometers in total. The monorail line will be integrated with other mass transit vehicles including the metrobus and subway, facilitating travel for Istanbulites across the relatively small but heavily populated city. Traveling time between two stops of the monorail is planned to be two minutes.

The municipality is expected to abolish minibuses following the implementation of the monorail project. The minibus, a common form of public transport in Istanbul and other cities, especially on narrow streets that large buses cannot access, is a potentially fatal threat due to the reckless behavior of the drivers.

The monorail, widely used in Europe, Japan and China, will be able to carry at least 40,000 passengers daily, while larger ones have a capacity of 200,000 passengers. Istanbul, located at the intersection of two continents, suffers from horrıble traffic. An average trip between two locations, particularly during rush hours, often takes more than half of the average travel time during trips at times of lesser traffic.

Heavy traffic is attributed to insufficient road infrastructure in the city that is unable to cope with the everincreasing number of vehicles that grows along with the rising population. Authorities are seeking to decrease traffic congestion by adding more means of mass transit and urging motorists to use them instead of single-occupant cars.
Last Update: Aug 07, 2014 3:56 pm
RELATED TOPICS