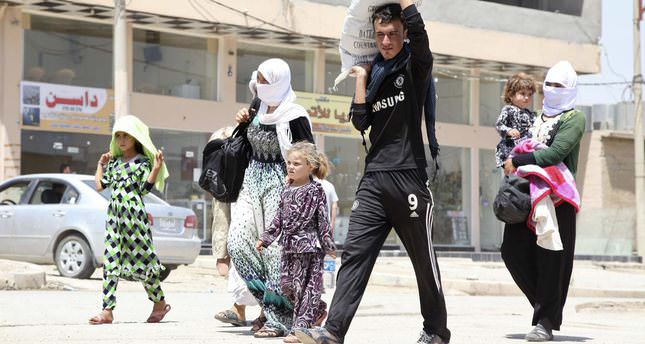 by Daily Sabah Aug 07, 2014 12:00 am
Turkish Foreign Minister Ahmet Davutoğlu said that humanitarian aid boxes from Turkey have been dropped by Iraqi helicopters into the Yazidi minority who fled to the Sinjar Mountains in northwestern Iraq to escape attacks from Islamic State of Iraq and al-Sham (ISIS).

Speaking in a televised interview on Turkish channel NTV, Davutoğlu on Aug. 7 remarked on the latest developments in Iraq and ISIS.

Davutoğlu pointed out that the Turkish Presidency of Emergency and Disaster (AFAD) transferred a significant humanitarian aid package to northern Iraq to be dropped in the Sinjar Mountains.

"We [Turkey] are also working to transfer a camp for 10,000 people, who are under the protection of Dahuk and we have also been continuing our efforts to let a government be established in Baghdad," said Davutoğlu.

"What has been happening in Tal-Afar is not only an ISIS-Turkmen clash. The basic roots of this development are sectarian policies adopted by previous Iraqi and Syrian administrations," the foreign minister said.

Davutoğlu said that Sunni Turkmens are tired of being suppressed, Sunni leaders have been excluded from the Iraqi political process and there has been a radicalization objective of Shiite Turkmens.

"Turkmens have been separated just like Arabs and, unfortunately, their separation has caused the greatest harm to them. Now, there is a humanitarian crisis amid Yazidis. They have fled to the mountains."

The foreign minister added that Yazidis who have been waiting on the borders of Turkey started to enter Turkish and that Turkey is the only country who is carrying out a humanitarian operation in Iraq.

Davutoğlu stressed that all eight countries around Turkey are in an administration crisis and that some of them are even completely out of control.

"There is a fire circle around us [Turkey]. While all governments around Turkey are separating and Turkish neighbors are in critical situations, we have been gaining power. We cannot risk it," said the foreign minister, urging the entire nation to be aware of provocative news on media outlets.

Evaluating an unscheduled security meeting held on Aug. 7 in Ankara under his leadership and with the participation of Land Forces Commander General Hulusi Akar, Gendarmerie General Command General Servet Yörük and National Intelligence Organization (MİT) chief Hakan Fidan over the crisis in northern Iraq caused by ISIS, Davutoğlu said it was a routine coordination meeting. It was also reported yesterday that Turkish fighter jets made reconnaissance flights over northern Iraq.

On Wednesday, Davutoğlu also spoke on the latest developments in the Israeli attacks on Gaza and the current cease-fire. Davutoğlu said, "Turkey is in talks with Israel and Egypt about establishing an air corridor to provide humanitarian aid to Gaza and evacuate potentially thousands of injured Palestinians for treatment in Turkey."

Welcoming the 72-hour cease-fire in Gaza that came into effect on Tuesday, Davutoğlu said that Turkey is continuing its contact to help maintain the cease-fire in Gaza and that the biggest need there now is water and electricity.