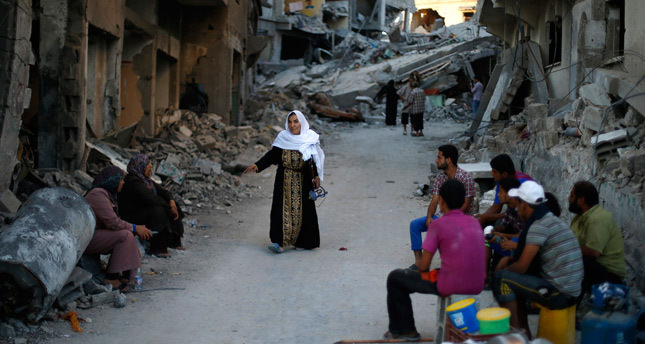 by Fatih Şemsettin Işık Aug 08, 2014 12:00 am
On Thursday evening, in a joint live broadcasting, an aid campaign was organized to help Gaza, under the leadership of Turkish nongovernmental organization Humanitarian Relief Foundation (IHH), raising TL 12 million ($5.55). Organized under the name of "Don't stand idle for Gaza," the campaign attracted mass attention.

The telethon saw the collection of TL 12 million over a five-hour program aired by more than 40 private national and local TV and radio channels such as TVNET, Channel 24, 360 and Channel A. Many politicians, journalists, NGO representatives, businesspeople and other respected figures of Turkish society answered phone calls from donors in the telethon. Donors sent their donations via SMS by typing "GAZZE" at a charge of TL 5.

İHH chairman Bülent Yıldırım thanked those who contributed to the event and said he hoped this campaign would inspire other humanitarian institutions. "We are with the people in Gaza." said Yıldırım. İHH Palestine representative Mehmet Kaya kept regular updates about the present situation in Gaza throughout the live phone-in. Zeynep Armağan Uslu, an AK Party lawmaker for Şanlıurfa province who joined the telethon and said he "appreciated Turkish society's strong stance on Gaza" and claimed they fulfilled their responsibility as a nation.
RELATED TOPICS