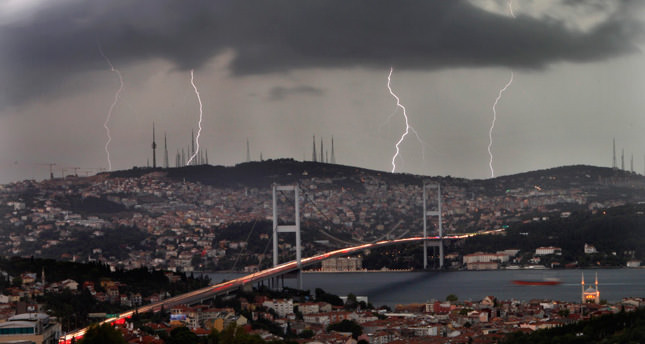 Storms and heavy rainfall, hailing from the west, gripped Turkey on Thursday and Friday, leading to two deaths and mass cancellation of flights. Experts warn that the bad weather will continue throughout August, with sporadic outbursts of precipitation expected

The heavy weather that affected Turkey on Thursday started in the Trakya region in the northwest before sweeping its way eastward. The country's western and northern regions were rocked by strong winds, storms and rainfall. One person was killed in the western city of İzmir when he drowned in floodwaters and a lightning strike killed another in the northwestern province of Sakarya on Thursday. Floods hit many cities in the Trakya, Ege and Marmara regions in the west, though they were not widespread.

In Istanbul, precipitation started around 4 p.m. on Thursday after dark clouds covered almost the entire city. Heavy rain and storms brought traffic to a halt in the city and led to power outages in some parts of the city. Two people were injured when a 20-meter high tree collapsed due to strong winds in the city's Beyazıt Square. Meteorologists said precipitation varied between 7-25 kilograms per 10 minutes while the speed of winds reached up to 55 kilometers per hour. In Avcılar, a district on Istanbul's European side, three cars were stranded in floodwaters and their occupants were rescued by bulldozer buckets. In Güngören, another district on the European side, bulldozers aided the rescue of people stranded in floodwaters on main streets. The city's main roads connecting to highways were lightly flooded, leading to traffic jams.

In İzmir, 16-year-old Ümit Özcan was trying to help occupants of a car stranded in floodwaters after an accident when the raging waters yanked him beneath the car. Stuck underwater, the young man drowned while his three other friends survived. In the northern province of Sakarya, 18-year-old Ömer Sakallı, a migrant worker working at a hazelnut orchard, was seeking cover from the heavy rain when a bolt of lightning struck him dead under a tree. Two others were injured in the incident in the province's Hendek district.

Floods also hit Çanakkale, a western city by the Dardanelles Strait. Floodwaters flowing into the strait polluted the seawater while the province's many districts were inundated by heavy floods. Nine people stranded at a construction site were rescued by rescue workers. Two people were injured by a lightning strike while they were on a picnic by the Lake of İznik in the northwestern province of Bursa. An intense storm and a tornado hurtled a 200-ton crane and containers in a shipyard in Körfez, a district of the northwestern province of Kocaeli into the railroad where Turkey's recently inaugurated high-speed train operates. The accident halted high-speed train services between the capital Ankara and Istanbul. Crews managed to remove containers blocking the railroad but efforts to lift the crane were still underway as of press time.

The railway authority allocated buses to take train passengers to Istanbul. Storms also led to flight cancellations in Istanbul on Thursday and Friday. Turkish Airlines accommodated 4,000 passengers at hotels following cancellations while over 10,000 passengers had to wait at Atatürk Airport due to delays in domestic flights. Sixty flights were cancelled while flights partially resumed both at Atatürk and Sabiha Gökçen airports in Istanbul on Friday although the airports were not fully operational as of press time.

A plane carrying the Minister of Health Mehmet Müezzinoğlu had to land at an airport in the province of Tekirdağ after taking off from Sabiha Gökçen airport en route to the province of Çanakkale. The eight-seater plane was caught in a storm but the pilot managed to land it at the airport in Tekirdağ, west of Istanbul, instead of its original destination in the south of the city after the pilot lost control of the plane for a few minutes due to bad weather. The storms are expected lose momentum by Saturday and mostly sunny weather is predicted for Sunday and next week. The system of rainfall will travel to the central, eastern and southern regions of Turkey.

Weather forecasts for Turkey's Marmara, Ege (Aegean), Karadeniz (Black Sea) and Akdeniz (Mediterranean) rule out the possibility of a storm occurring from Saturday to Monday. Rainfall will affect the Mediterranean's eastern regions including the Gulf of İskenderun on Saturday. The Mediterranean Sea will see partly cloudy weather from Sunday to Monday with fine visibility and relatively weak winds. Partly cloudy weather is predicted for the Aegean Region over the weekend and on Monday.

Meteorology experts warn against the effects of global climate change taking its toll on Turkey. Tornados, rarely seen in the country, have become a familiar sight. The merging of cold and hot weather systems over Turkey poses a risk of bringing out weather conditions unusual for Turkey, according to the experts. Experts warn that rainfall will become more frequent in the summer months in the following years for Turkey as well as a threat of drought. Some experts predict August and September will be the months during which the effects of climate change, namely heavy
precipitation and tornados.
Last Update: Aug 09, 2014 2:15 pm
RELATED TOPICS