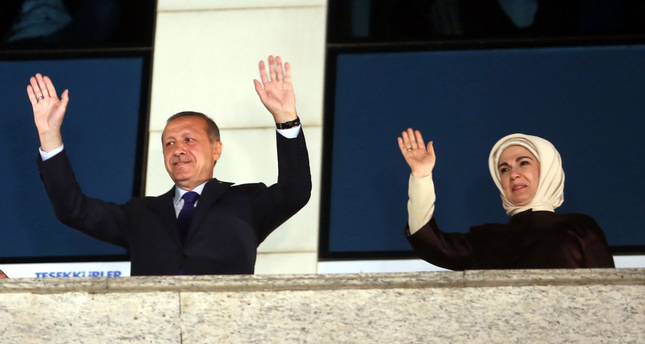 by M. Akif Madenoğlu Aug 10, 2014 12:00 am
Only a few doubt that Recep Tayyip Erdoğan will emerge victorious from the election on Aug 10. Even political circles in Ankara have started to discuss what messages will be delivered by Erdoğan in his balcony speech after the election results, and our source close to the Prime Ministry has unveiled possible messages exclusively to the Daily Sabah.

Turkey will experience a presidential election for the first time in its history as people go to the polls on Aug. 10 to elect their new president. The latest poll result indicates that AK Party candidate Erdoğan will probably win the election in the first round. Many political analysts also expect no surprise in the presidential election. It is anticipated that this will be a landslide victory for Erdoğan.

According to sources in the ruling AK Party, Erdoğan will touch upon four main topics in his balcony speech: a new constitution, the reconciliation process, fighting the parallel structure and democratization. Our source indicated that Erdoğan would emphasize the new constitution in his speech, as he promised during the presidential campaign. As Erdoğan's presidential vision document indicates, "The new constitution must be inclusive, not exclusive, and advocate liberty, rather than oppression." Our source also anticipated that Erdoğan would be giving messages showing his inclusiveness and solidarity with the other sides. In addition, Erdoğan would allocate an important section of his speech to the consolidation of the Turkish democracy. Erdoğan's presidential vision document, which was shared with the press following the announcement of his candidacy, reveals his view on democratization. "On the road to 2023, Turkey aims to catch-up with the standards of advanced democracies. For this purpose, we must intensify our efforts, and implement reforms to promote not only political representation, but also political participation."

Erdoğan also will cover the reconciliation process in his speech, and give some information about the roadmap of the process, our source disclosed. Our source expected Erdoğan to emphasize the debilitation of the parallel state. On top of that, Erdoğan will point out his decisive stance against the Gülen-affiliated parallel structure. Allegedly, the Gülen Movement, headed by controversial U.S.-based imam Fethullah Gülen, tried to topple the government in the Aug. 17 operation with its members that had infiltrated the police and judiciary.

Prime Minister Erdoğan declared, "I will not be an impartial president," and added in one of his presidential election meetings, "There are two sides. The first one is the nation, and the second one is the state. There will be a president who takes the side of the nation. This is the difference. That is what both Turkey and our democracy needs." Our source close to the Prime Minister indicated that Erdoğan would say that he would be a "politically responsive president" in his possible balcony speech after the election.
Last Update: Aug 10, 2014 5:26 pm
RELATED TOPICS