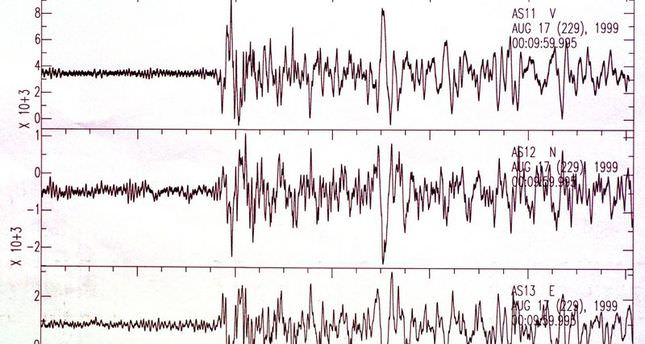 by AA Aug 11, 2014 12:00 am
Fifteen years ago this week, a cataclysmic earthquake killed around 18,000 people in Turkey, but a decade and a half later geologists and Turkey's emergency authority claim that Istanbul is still not "completely ready" for a future big quake – something which experts say could happen at any moment.

On Aug. 17, 1999 a magnitude 7.4 earthquake hit the industrialized town of Izmit in western Turkey. Istanbul – 80 km east of İzmit – was also badly affected by the quake, the deadliest in Turkey in 60 years. Around 1,000 people were killed in buildings unable to withstand the enormous forces generated.

"No one can say a big-scale earthquake will not happen today or tomorrow," one geologist at ITU Eurasia Institute of Earth Sciences, Okan Tüysüz said. "We predict a minimum magnitude of 7.2 on the Richter scale at any time," adds Naci Görür, a geologist at Istanbul Technical University.

Almost 70 percent of buildings in Istanbul are still at risk and 27 percent of them are at "high risk" – and must be demolished immediately – according to data from the Ministry of Environment and Urban Planning.

The government launched building projects in Istanbul and across Turkey in 2012 to renew structures which are quake resistant. "The most important project launched after the August 17 quake has been urban transformation," geologist Tüysüz says.

"Strengthening works at buildings, schools and bridges are important works to resist quakes," he said but Tüysüz claims these projects are not sufficient and that most of the transformation works are aimed at generating 'unearned income.' "

Görür holds similar ideas: "Yes, there are some works but they are not enough, comprehensive [or] transparent."

"The public's security of life should be a priority, not building luxury buildings. Instead of constructing many luxury buildings, secure buildings for everyone could have been built," he says.

Districts which are close to the coast are at higher risk compared to the other areas across the Marmara region, geologists say. "Offshore districts are expected to be less affected by a possible quake," Tüysüz says.

According to data from the Prime Ministry's Disaster & Emergency Management Presidency – or AFAD – Avcılar, Zeytinburnu, Adalar, Eminönü, Maltepe, Pendik and Üsküdar are among the most at-risk districts in Istanbul while Sarıyer and Eyüp districts are much more secure.
AFAD plays an important role in preparing the country for a quake. It has been carrying out projects to minimize the effects of any disaster through an earthquake strategy and action plan launched in 2011.

Within this framework, awareness raising projects like "Disaster-ready families," "'Disaster-ready schools," and "Disaster-ready workplaces" have been carried out. These projects claim to train families, students, teachers, employers and staff to be ready for a quake and to rebuild houses, schools and workplaces, which are not earthquake resistant.

The state also launched a project in 2013 to establish 27 logistical warehouses including thousands of tents, heaters and beds in 15 regions across Turkey. The project is scheduled to be completed at the end of this year.

In cooperation with German scientists, the presidency last month also placed three seismometer stations – two of them in Yalova and the other one in Tuzla – 300 meters underneath the Marmara Sea to monitor the footsteps of a possible major earthquake. There are plans to establish four more stations across the country.

"Being 300 meters underneath the sea is very important so that we can closely follow any seismic waves and take action accordingly for a big-scale quake," says Caner Olcay Aşık, a specialist at AFAD.

In order to minimize the effects of a strong quake, public awareness is also crucial. "AFAD is conducting many projects against any possible disaster but the public's participation in these projects is very important," Aşık said.

However, concerns remain: "When we consider the public and NGOs, we cannot say Turkey is completely ready for a large-scale earthquake," says Aşık.

Geologists are also claiming the public is "insensitive."

"After 15 years, people have almost forgotten the quake. The danger is increasing day by day but people are not taking even basic measures like securing the furniture on the wall, which is straightforward," Tüysüz said.

"They remember the quake when it occurs. They forget it when it finishes. They are insensitive and does not take any measures," Görür adds.