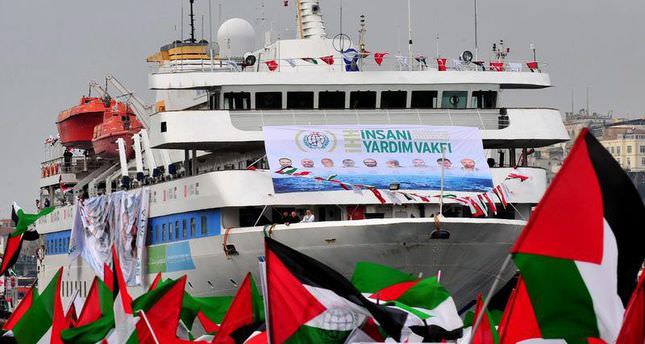 by Anadolu Agency Aug 11, 2014 12:00 am
The Turkish aid group, IHH said on Monday it would send a new flotilla of ships to break Israel's siege of Gaza, four years after Israeli commandos illegaly stormed its flotilla in international waters and killed 10 Turkish activists.

The Humanitarian Relief Foundation (IHH), which organised the first flotilla, said in a statement that activists from 12 countries had met in Istanbul and taken the decision to send the ships "in the shadow of the latest Israeli aggression on Gaza".

"As most governments are complicit, the responsibility falls on civil society to challenge the Israeli blockade on Gaza," it said.

The IHH would hold a press conference on Tuesday, it added. Turkish Foreign Ministry officials had no immediate comment.

Israeli assault on the Turkish ship the Mavi Marmara in international waters en route to Gaza sparked widespread condemnation and provoked a major diplomatic crisis between Turkey and Israel.

As part of an ongoing criminal trial brought by the IHH and the victims' families in 2012, a Turkish court in May ordered the arrest of four former Israeli military chiefs involved in the raid.

Last year, Israeli PM Benjamin Netanyahu apologized to Turkey for the incident in a half-hour phone call with Turkish President-elect Tayyip Erdogan. However, Israel's latest aggression on Gaza, which has killed an estimated 1,910 Palestinians, mostly civilians, has once again inflamed tensions between the two countries.