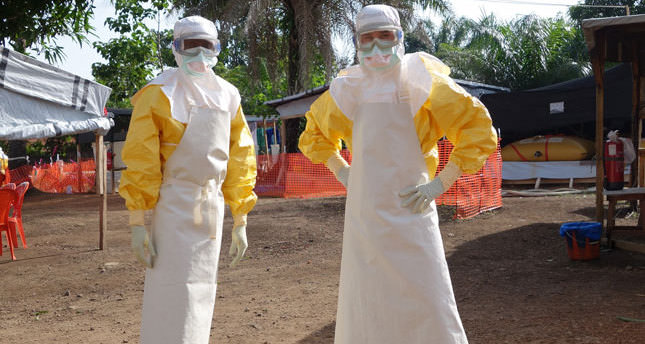 by Daily Sabah Aug 12, 2014 12:00 am
Turkey is on alert regarding Ebola, the lethal virus that killed over 1,000 people across the world, particularly in West African countries. The Ebola panic surfaced yesterday when a passenger aboard a Turkish Airlines flight from Lagos, Nigeria fell ill with a high fever. Doctors were called to the plane when it landed at Istanbul's Atatürk Airport. The unidentified passenger and a group of people he or she was traveling with were quarantined briefly on the suspicion of the Ebola infection. The first examination revealed that the passenger did not have the Ebola virus.

The Ministry of Health's Border Health Directorate reassured visitors to Turkey that all measures have been taken against a potential spillover of the Ebola outbreak, and passengers traveling from African countries are closely monitored against any health concerns. Apart from screening the passengers, the ministry urges all travelers from Africa to immediately go to a hospital in case of the emergence of any symptoms such as sudden and high fever, severe headache and fatigue and muscular pains. A few days after contracting the infection, the patient suffers from kidney and liver
failure, which is followed by internal bleeding and death.

The ministry has already issued a warning to Turkish citizens traveling to African countries gripped by the outbreak. Though no travel ban to those countries was imposed, the ministry informed citizens about indications of the virus include symptoms that can emerge three weeks after the initial infection. Minister of Health Mehmet Müezzinoğlu has stated that Turkey does not face any risk from the virus, and has taken precautions against a potential outbreak. The Turkish Foreign Ministry also warned citizens traveling to the countries hit by the outbreak to avoid crowded places, not to eat meat products and to pay greater attention to hygiene.

The total number of people who have died from the deadly Ebola virus topped 1,000 yesterday, according to the World Health Organization (WHO) figures. The outbreak was so far limited to West African countries including Nigeria, Sierra Leone, Liberia and Guinea. However, a Spanish national died in a hospital in Spain after he was repatriated from Liberia where he contracted the virus on Aug. 7. The victim, a priest, was the first European infected by Ebola. Ebola has no cure or vaccine, but Liberia requested an experimental drug to treat the patients from a U.S. company, triggering a debate whether it was ethical to use an unregistered medication for treatment. Nevertheless, a WHO panel of experts concluded yesterday that "in the particular circumstances of this outbreak and provided certain conditions are met," it was "ethical to offer unproven interventions with as yet unknown efficacy and adverse effects, as potential treatment or prevention."
Last Update: Aug 13, 2014 12:03 am
RELATED TOPICS