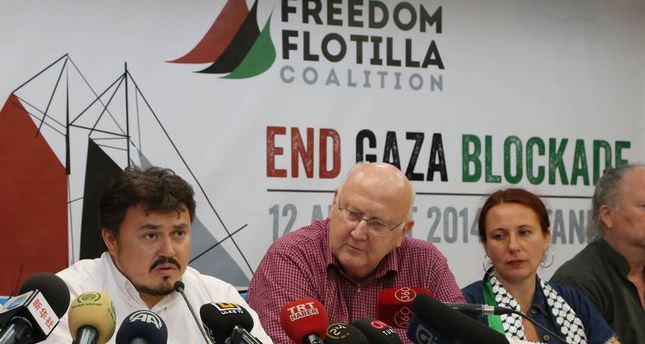 by AA Aug 12, 2014 12:00 am
In a packed press conference at Humanitarian Relief Foundation headquarters in Istanbul yesterday, the international groups making up the Freedom Flotilla Coalition declared their intention to sail a fleet of ships loaded with humanitarian aid to Gaza to an as-yet undeclared date in 2014.

The flotilla is planned while Israel's military invasion of Gaza, which has lasted for more than a month, continues. The flotilla members intend to challenge the seven-year blockade of the Gaza Strip by Israel.

"The flotilla will leave in 2014," said Durmuş Aydın of Humanitarian Relief Foundation (IHH), the Turkish NGO participating in the flotilla. "Hundreds of thousands from around the world support our work. We will work until the blockade is lifted. We act to support the Palestinian people."

The Turkish NGO was also the sponsor of another Gaza-bound humanitarian aid flotilla in 2010 that was intercepted by Israeli forces, killing nine Turkish activists on one of the ships, the Mavi Marmara.

Despite rumors that the NGO's president Bülent Yıldırım had sought the military support of Turkey's President-elect Recep Tayyip Erdoğan to send a naval escort along with the Turkish ship of the flotilla, the coalition declared that no Turkish military escort would be present and that there would only be civilian ships.

"There will be no military escort, we don't want it," said Dror Feiler, an Israeli-born Swedish spokesman for the Flotilla Coalition. "If some countries want to help the Gazans, they can help by acting to end the blockade through governmental and diplomatic means. We are a civil society group and act through civil means."

When asked about the flotilla members' reaction should Israel intervene, Feiler responded, "We are ready to sacrifice our lives for freedom. Even if the Israelis sacrifice us again, we will come again. We cannot be threatened."

"We haven't decided on all the boats in the flotilla, we have decided to seek a very international [coalition] to be on the boats," added Ann Ighe, a Swedish spokeswoman for Ship to Gaza Sweden, also part of the coalition.

"After 2010, there was some easing of the blockade, which could be said was a result of the flotilla, but the blockade continues, so we sail again," she added. "This is civil disobedience."

Since 2007, a naval blockade on the Gaza Strip has been imposed by Israel.