In the face of influx, Turkey seeks to help Iraqi Yazidis at home 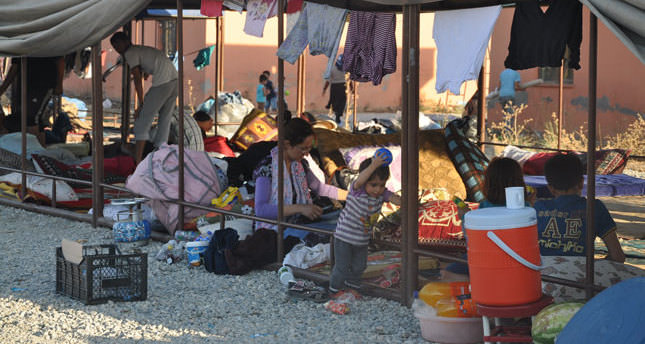 by Daily Sabah with Agencies Aug 12, 2014 12:00 am
One hundred Iraqi Yazidis who have been displaced due to the threat of the Islamic State of Iraq and al-Sham (ISIS) have taken shelter in neighboring Turkey and more arrivals are expected due to the ongoing situation. Rather than helping them in Turkey, authorities seek to reach out to Yazidis through delivering aid in Iraq due to the rapidly deteriorating security situation. Following the ISIS takeover of towns in northern Iraq where the country's Yazidi minority is concentrated, Iraq's northern neighbor Turkey has seen hundreds of Yazidis fleeing the violence and crossing over the border.

A small group was accommodated in Şırnak, with the assistance of Turkish authorities while others have traveled to other cities in Turkey where their relatives live. Local authorities and charities in Şırnak have supplied humanitarian aid to Yazidis but apparently there is not yet a long-running solution for this sudden influx of the displaced. Amnesty International Turkey issued a statement on the Yazidis, raising concerns that this Iraqi minority is stranded on the border.

The international NGO is urging both the Turkish and Iraqi authorities to allow those without a passport to cross the border. Amnesty International claims nearly 200,000 people have been displaced thanks to ISIS while they fight for their lives near the Iraqi-Turkish border in the absence of basic humanitarian needs.

Amnesty International Turkey called on the international community to help both Turkey and the Kurdistan Regional Government (KRG) in northern Iraq that hosts displaced Yazidis arriving from further south. The organization urged Turkish authorities to cooperate with local NGOs and undertake preparations to address the needs of Yazidis, as well as providing them temporary asylum status under international laws.

Well-off Yazidis have settled in the big cities of Turkey while the impoverished ones stay in residences allocated to them, facing an uncertain future. Nongovernmental organizations say hundreds of Yazidis are also waiting at the Habur border crossing of Turkey and on the Iraqi side of border across Turkey's Mardin province as they have no passports to enter into the country.

The Turkish Prime Ministry's Disaster and Emergency Management (AFAD) which provides assistance for the displaced, set up a mobile coordination center in Silopi, a district in Şırnak where Yazidis first arrived. AFAD officials said 100 Yazidis, who are in urgent need of accommodation, crossed into Şırnak on Aug. 6 and there was not a major flow of refugees from Iraq. Speaking to Daily Sabah, an AFAD official said their priority was to help Yazidis in Iraq as most had difficulty traveling to Turkey. The official said a camp for 16,000 displaced Yazidis is being set up some 25 kilometers away from Dohuk, a northern Iraqi town controlled by the KRG near the Turkish border and they will provide humanitarian aid to the displaced who will be settled at the camp. Some 80,000 Yazidis took shelter in Dohuk and Zakho, a district of the Dohuk governorate.

The ISIS presence and clashes between Kurdish peshmerga forces pose a challenge for Yazidis fleeing the violence. Most Yazidis have to endure lengthy walks to the safer regions in the north while children have fallen victim to starvation and thirst along the way. Ayhan Sefer Üstün, chairman of the Turkish Parliament's Human Rights Committee, told Anadolu Agency that Turkey considered setting up tent camps, like those established for Syrians, for Yazidis in the Turkish cities bordering with Iraq. Üstün said Turkey had always "sided with the oppressed," adding that Yazidis would be no exception. "Turkey condemns ISIS, oppression and massacre of the innocent," he said. Üstün said a humanitarian tragedy was unfolding in Mount Sinjar, the mountain where most Yazidis fleeing ISIS took shelter. "They are now gradually arriving in Turkey. Turkey will provide them with humanitarian assistance and help them to be relocated in their home towns once the situation in Iraq is back to normal," Üstün said.

Turkish Foreign Minister Ahmet Davutoğlu told reporters yesterday Turkey had launched a comprehensive aid campaign for Iraq's Yazidis. "We will be with our Iraqi brothers and sisters," Davutoğlu said.

Meanwhile, 350 Yazidis fleeing Iraq took shelter in Cizre, another district of Turkey's Şırnak province, on Sunday and yesterday. Locals provided immediate aid to Yazidis such as food and clothes. Yazidis told reporters that a large number of fellow Iraqis starved to death while traveling on foot, including around 300 children. They said they hid in the mountains for eight days and managed to make it into Turkey but there were still others staying in the mountains in dire conditions, with their number estimated to be 5,000 people.

Turkey is already facing a steady flow of the displaced from Syria, another southern neighbor. The number of Syrians in Turkey has exceeded 1 million and although the country set up tent camps and provided other means of accommodation for over 200,000 Syrians, a large number of them have stayed outside the tent camps.

Turkey has been praised for its outstanding efforts to address the needs of Syrians fleeing the civil war in their country but has trouble in providing for all Syrians in the country due to little contributions from the international community to take care of Syrians. Syrians not staying in the camps due to a lack of tents or "container houses" are forced to live in abandoned houses or parks if they are impoverished. This often gives way to social crises as locals provoked by ultranationalists have started riots against Syrians they blamed for cheap labor, high housing prices and rising crime rates.
Last Update: Aug 12, 2014 9:47 am
RELATED TOPICS