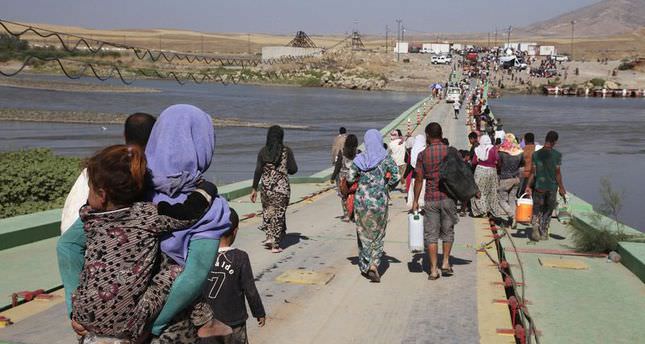 by Daily Sabah Aug 12, 2014 12:00 am
Turkey now hosts 2000 people from Iraq's Yazidi minority who took shelter in southeastern Turkey after fleeing violence in their homeland. Some members of the group, that survived a troublesome journey, underwent medical examinations in the Turkish province of Şırnak where they are being accommodated.

The Silopi governorate dispatched a team of doctors to examine the group. Two ailing Iraqi Yazidis were hospitalized in a state-run hospital in Silopi while doctors reported others were in relatively good health. The governorate will also provide free medicine for the group.

The group, fleeing their hometown in Iraq's Sinjar region following attacks by militants of the Islamic State of Iraq and al-Sham (ISIS), first arrived in northern Iraq controlled by the Kurdistan Regional Government (KRG), and traveled further north into Turkey as the conflict in Iraq between Kurdish peshmerga and ISIS led to a deterioration of the security situation.

Hasan İpek, governor of Şırnak, traveled to northern Iraq on Monday evening to hold talks with his Iraqi counterparts about the situation of the Yazidis. After talks with the governor of Iraq's Dohuk province where Yazidis took shelter, İpek said Turkey planned on setting-up two tent camps for the displaced Yazidis and Turkmens near the Iraqi side of the Turkish-Iraqi border. İpek said Turkey already dispatched two aid trucks to Iraq on Monday for humanitarian assistance to the displaced. He said that the Şırnak governorate will provide logistics support for a camp that will be set-up for the Yazidis exclusively. İpek also denied reports that masses of Yazidis were unable to enter into Turkey. "No displaced people are turned back on the border," he said. Media reports had emerged earlier that Yazidis without a passport were stranded on the border.

Another group of 250 Yazidis settled in Cizre, another district of Şırnak. They are staying in the houses provided by the Cizre municipality. Turkish media reported the figure as 600 including those who illegally crossed into Turkey.

Turkey is a seasoned host of the displaced from other countries. Civil war in its southern neighbor Syria had triggered a refugee crisis with millions of people being displaced, but the Turkish government, through its open-door policy, embraced Syrians it described as "guests." Facing another stream of the displaced from Iraq, Turkey plans to help internally displaced Turkmens and Yazidis primarily in northern Iraq until the security situation is under control in the region.