More Turkish women in the workforce to improve economy 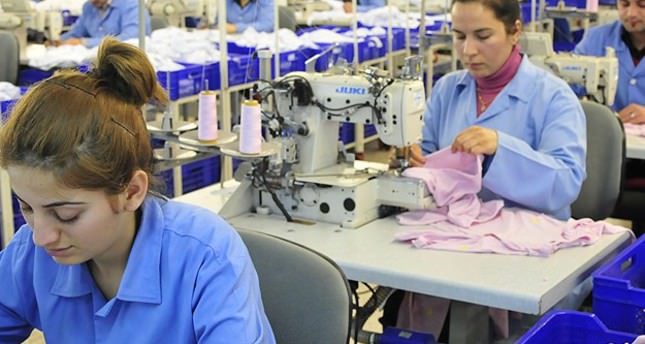 by AA Aug 13, 2014 12:00 am
The employment rate of Turkish women will exceed 35 percent by the year 2023. The government has defined this as one of its objectives for the centennial of the Turkish Republic.

As defined in its plan "National Employment Strategy 2014-2023," the ruling Justice and Development (AK) Party considers as essential to favor female employment in order to become the 10th largest global economy in 2023.

But the country has a long way to go.

In 2012, the employment rate of women in Turkey was only 29.5 percent, the lowest rate of 34 countries, according to 2014 Economic Survey of Turkey by the Organization for Economic Co-operation and Development (OECD) .

Turkey lagged far behind Greece at 41.9 percent (while Iceland boasted the highest female employment rate with 78.5 percent followed by Norway with 73.8).

Furthermore, the Turkish rate was well below the OECD average of 57 percent and even further below Turkish male employment rate, which stands at 69 percent, still according to OECD's 2014 Economic survey of Turkey.

"The first reason of women's not being in labor force is our rooted social belief that they should stay at home and care for their family," says Gülden Türktan, president of KAGIDER Women Entrepreneurs' Association in Turkey

In order to counter the pervasive tradition, KAGIDER - Women Entrepreneurs' Association members travel all around the country and organize meetings to encourage local women to work and to have confidence in themselves.

Türktan adds that each day more and more women participate in business life as we hear about more success stories of woman entrepreneurs.

In recent years the government has also encouraged female employment namely, in the private sector.

For instance, since 2008, the government offered to pay a company's share of female employees' social security benefits for 54 months, if it hired women who have been unemployed for six months or more.

Some of these policies have visibly had their effect as the female employment rate, while very low, has been steadily rising in the last decade from 23,3 percent in 2004 to 29,5 percent in 2012, as confirmed in the 2013 report of the Turkish Statistical Institute (TürkStat).


In order for this trend to continue and the 35 percent female employment to be reached in 2023, the Turkish government has recently implemented new policies such as an 18-week maternity leave, a flexible part-time working model and the establishment of day care centers at the workplace to permit women to work while starting families.

However, some remain skeptic concerning the feasibility of the government's 35 percent objective-despite the fact that it is only a six-percentage-point increase, the same that occurred in Turkey between 2004 and 2012.

Elif Loloğlu, president of Women's Movement Association, finds it "impossible" for the female employment rate in Turkey to reach 35 percent in the next decade.

She says women are neither encouraged enough, nor provided with, the means to participate in the labor market, despite gender equality in the law.

"I don't believe that the existing practices, which supposedly support more women employment, are really serving the purpose," she says.

Loloğlu says only efforts to ensure women are more qualified and incentives to encourage well-educated female employment will pave the way for an increasing rate of women employment.

It is precisely because Turkish women lack access to higher education, that they are employed less than men, says Günay Bolukoğlu, a vice-principal from the Turkish Employment Agency ISKUR.

Indeed, data from Turkish Statistical Institute shows the employment rate in 2013 stands at 72.1 percent for postgraduates while it drops to 27.5 for secondary school graduates and to 17.4 for illiterate women.

According to Gülden Türktan, president of KAGIDER Women Entrepreneurs' Association, women have proven very successful in the Turkish banking sector and are expected to go into such sectors as tourism, finance, health in the years to come.

"I believe that the rate in Turkey will definitely go beyond 30 percent and even reach 50 in a decade," says Gülden Türktan, president of KAGIDER Women Entrepreneurs' Association.